For many users, this is a life or death situation
by Michaela McSheffrey
Wednesday, July 13, 2016

Troubled and frustrated—but mostly concerned—Walt Weisser found himself searching the Internet in 2015, desperate to find a solution for managing the contents in his mother-in-law, Marie’s, oxygen cylinder. Marie, reliant on medical O2, had just lost her husband and was now residing in a long-term care facility.

Believing there must be some sort of technological solution capable of alerting both Marie and the nursing staff when her O2 was getting low, Weisser found the MIJA Innovative Pressure Solutions web page and the Critical Alert Oxygen.

Weisser wrote to MIJA stating, “Several times the oxygen bottles on her wheelchair were empty, or she had been to meals or activities and had run out of oxygen. She was unaware her bottle had emptied until she exerted herself and became extremely winded. We were fearful she was at risk for a heart attack or stroke as a result of her heart overworking due to lack of oxygen.” 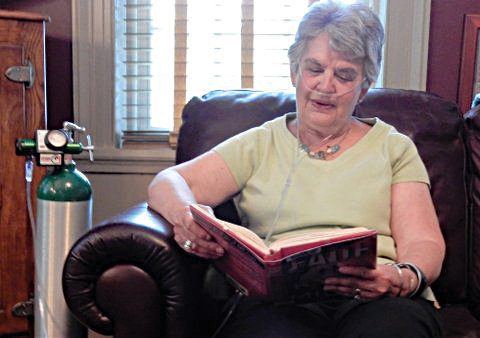 The Weisser family is not alone in their concerns regarding the content levels in medical oxygen cylinders. Oxygen consumers at home, in nursing homes, health care facilities and hospitals, as well as their caregivers and emergency first responders all struggle to ensure that O2 cylinders are properly filled by regularly checking the pressure gauge on the cylinder’s pressure regulator. Even then, for some, it is difficult to interpret the readings

A properly filled O2 cylinder can mean the difference between life and death. No one knows this better than Jack McSheffrey, the founder and CEO of the Rockland, Massachusetts-based MIJA Industries. MIJA developed and perfected the spiral wound pressure gauge used on most medical oxygen regulators and fire extinguishers.

McSheffrey understood Weisser’s issue, as he had the same concern several years before when visiting his own mother-in-law in a nursing home. He was taken aback by her inability to pay attention and lack of color in her face. He realized that she might not be getting oxygen from her cylinder. He looked at the pressure gauge and could see that the pressure was in the red zone, indicating the oxygen cylinder was empty. He immediately found a nurse’s aid to come replace the cylinder and averted a potential emergency for his mother-in-law. The incident was a heads-up for McSheffrey that there was a need for an improved manner to manage and convey the contents of an oxygen cylinder. McSheffrey and the engineering team at MIJA began to conceptualize an intelligent pressure gauge, which would relieve the pressures upon patients and caregivers by providing a signal—a localized visual alert and an audible alarm—when an oxygen cylinder is approaching critically low levels. “The concept was pretty straightforward,” McSheffrey says. “The problem we faced was incorporating the technology into an appropriate design and ensuring the proper battery life.” McSheffery’s vision evolved into a product development project that produced the Critical Alert Oxygen.

Back to Marie and Walt. In September 2015, Weisser became one of the first customers to purchase the new Critical Alert technology for Marie to use on her oxygen cylinder. He says Critical Alert made a huge difference not only to her, but also to those who care for her. “Finally, we had a solution to keep my mother-in-law’s oxygen bottles flowing uninterrupted. Monitoring oxygen bottles appears to be a universal problem not only in senior homes and assisted living facilities, but also especially nursing homes. It is scary to have a loved one in that situation.”

Marie’s care center smoothly implemented the Critical Alert Oxygen onto her O2 bottles, fitting perfectly onto the post valve used in the facility. Within a short period of time, there were no further instances of Marie’s O2 running low or going unnoticed by the medical staff on duty.

“We checked with several staff members, and they all like the alarm. The comments we receive range from “works great” and “love it” to “we wish all the residents had the alarm,” Weisser says. “It was a godsend.” With all the advancements in medical support devices, it makes sense that the ability to have the O2 cylinder signal when it reaches a critically low stage will become a standard for oxygen cylinder management.

Patients and caregivers are not the only benefactors of the intelligent Critical Alert technology. Suppliers are finding their customers are using fewer cylinders, as patients are no longer changing out cylinders too early in their lifecycles. Previously, the cylinders were being changed out with up to 50 percent of the contents remaining. This issue alone is a time saver as well as an improvement to inventory management.

The feedback MIJA has received from their customers has been unprecedented, but Weisser says it best: “My family is so thankful that MIJA addressed a problem affecting many people across the country, came up with a solid solution and designed an affordable product.

We all sleep better knowing Marie is safe, and no longer moving around with an undetected, empty oxygen bottle.”