The Mother of Necessity

Commitment from providers and manufacturers alike is crucial to success in the software market
by Greg Thompson
Wednesday, January 16th, 2013

Double digit sales increases were not uncommon among many software companies in 2012, a phenomenon fueled by providers desperate to lower costs in a competitive bidding era. The need to boost productivity and lower operating expenses motivated countless providers to look for an integrated system that went beyond mere billing prowess.

Spencer Kay, president and CEO of Fastrack Healthcare Systems in Plainview, N.Y., saw savvy customers who wanted software that transcended typical market requisites to include customer service elements. Software companies unwilling to innovate in these areas, he says, will likely go out of business.

While billing remains a priority, Fastrack customers now rely on express billing to automate the process and reduce the number of employees to process claims. “We also have the ability to schedule when reports are printed, so certain processes in the system are run at 2:00 in the morning,” says Kay. “You’re getting productivity even in the middle of the night, and not tying up the computer during the day.” 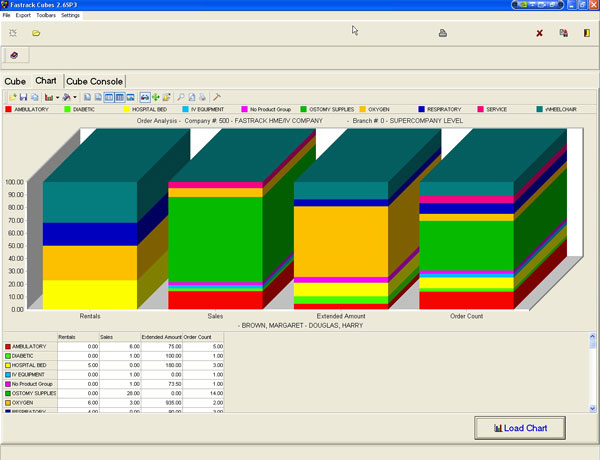 An interface to an integrated voice recognition system can make auto calls to patients that boost reorders. “And we can provide the ability for a driver at a patient’s home to actually clock the COD and process the credit card payment at the patient’s home,” he adds. “You know right away that payment is good. This is important, because a lot of providers have cash flow problems in today’s market and problems collecting everything they are owed. With reimbursement rates coming down, there’s really no choice but to improve.”

The complexities of the overall market can make it difficult to pinpoint areas where improvement is needed, but Dan Greyn, who is in system sales at Computers Unlimited, says software can help by controlling, monitoring and measuring different facets of the business such as inventory and intake. “When intake starts, where is the bottleneck?” he asks. “We have taken that intake to assist CSRs in qualifying patients. Right there, they know before product is dispensed whether or not they will be paid. It has saved anywhere from 18 to 47 percent just on intake process alone. One account that has used our product has saved more than 120 hours a month just on the intake side.”

As providers continue to hear about these new features, fundamental perceptions of the software market inevitably change to encompass the entire business. Software companies that fail to heed this change may soon be out of business. “Some of our competitors are shutting down and selling out because they are struggling,” says Kay, who added eight employees in 2012, bringing the total to 51. “Support at these companies is falling apart, and no new features are coming out. A lot of them just lack the financial resources to continue. As a result, the number of serious players is really going down.”

Jay Williams, HME and retail sales manager at QS/1, agrees that market conditions are not bound to get easier anytime soon. “We expect 2013 and 2014 to be difficult years for many software suppliers, so there could be some shakeout,” he says. “We are fortunate to be part of a company that is very strong financially. We are also strengthened by the fact that we provide more than just HME software, so we expect to be fine.”

Definitive Homecare Solutions experienced double digit sales growth in 2012, thanks largely to their ability to expand beyond the HME market. According to Marcus Banks, director of sales and business development, the company added “significant new customers in each of the three market segments we serve—HME, infusion and specialty pharmacy.”

Williams believes the competitive bidding environment has served to slow changes from one software to another. HME businesses can’t afford to switch due to reduced reimbursements, and that’s a problem because competitive bidding contracts usually increase the need for automation. And losing a bid, says Williams, often necessitates a new focus that requires new software.

Much of that focus has shifted toward the retail sector of the business, with providers preparing for massive demand thanks to the much-hyped Baby Boomers and their parents. “We have seen more and more interest in having a robust retail software package,” confirms Kent Barnes, senior vice president of sales and marketing at TeamDME! “Many providers have changed their focus from billing Medicare to other payer sources which can require more flexibility from your software program.” 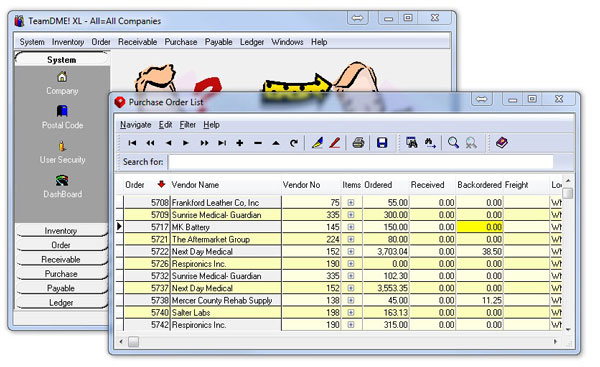 Some providers hunkered down and took a “wait and see” attitude toward competitive bidding. “Others, however, got very proactive and actively sought to increase efficiencies wherever possible,” adds Banks. “We saw increased deployment of Delivery Plus, our handheld delivery management app as a direct consequence of providers seeking to increase productivity and reduce operating expenses so as to be more profitable under competitive bidding.”

Gregg Timmons, president and CEO of MedAct, agrees that competitive bidding has “shaken the market and caused people to reevaluate how they conduct themselves and how productive they are.” From his office in McKinney, Texas—a suburb of Dallas—Timmons saw firsthand during Round 1 of competitive bidding that clients who won contracts often got more than they bargained for. 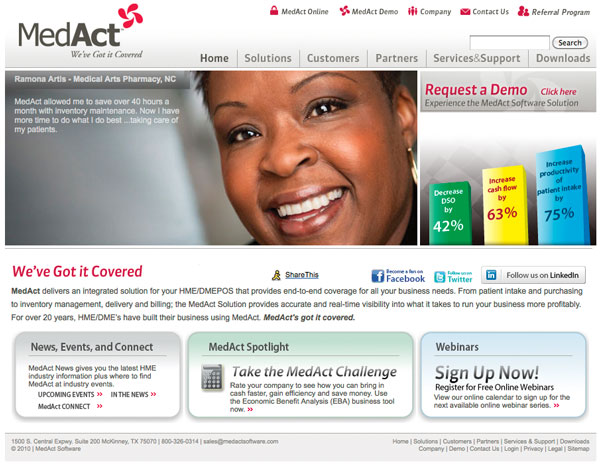 “They had a good mix of private pay and government pay prior to competitive bidding,” he says. “And after the contract they suddenly had 70 percent Medicare and 30 percent private pay. Private pay was where all the margin was, so even though you won a contract it did not mean that you’d won. What you do as business owners is look at how to make your business more efficient. Software provides a way to do that, if you deploy the software properly.”

These days, marketing departments in various software companies have perhaps done their job too well. A quick fix mentality pervades, but industry veterans are quick to point out that proper deployment requires patience.

“There is a misconception that you just install it and it miraculously works,” says Timmons. “Typically you must reexamine your business processes. We always spend time with our customers who are coming onboard to understand the market and how they are operating their business, and to make sure our software enhances their production without forcing them to do something one way or the other.

“We need to make sure we’re keeping what has already made them competitive in the marketplace,” Timmons continues. “Software will look different than what they had, so it’s a whole change model that you have to manage.”

Investing in the Business

As the market has consolidated over the last eight years, Dave Cormack—president and CEO of Brightree—has made a financial commitment to advancing the company’s core technology. “As providers have had to be more efficient, we have made the necessary investments behind the scenes and gone from 100 providers on Brightree eight years ago to 2,400 customers today,” he says. “We have invested about $40 million in our platform in the last eight years.”

The investment has led to increased market demand for Brightree products in the form of 380 new customers in 2012. Cormack also added more than 100 new employees to meet customer needs, bringing the overall employee total to 423. Sixty seven of those people are directly involved in product development.

In an effort to help providers get a sense of overall market conditions, Brightree plans to launch a benchmarking product next year. Company officials say the new feature will help providers quantify the progress that software is making in the day-to-day business.

“We are helping providers increase sales orders for resupply and consumables they offer by 50 percent, for example,” says Cormack. “We have our Brightree Connect patient contact platform, including interactive voice, that automates the process. Providers are increasing resupply revenues by up to 44 percent. These are real numbers. Software is important, because providers can automate processes that have historically been manual.”

Ultimately, Cormack believes fewer providers will survive in the coming years, a result of government policy and business consolidation. Those who are left, however, will still need ever smarter software. “The providers who are left will have much bigger patient populations to serve,” he says. “Because Medicare and Medicaid themselves see a 6 percent cost cut in growth in the DME reimbursement space through 2021. For those providers who take advantage of the efficiencies and tools that the likes of Brightree have—these guys will survive and thrive.”