Whether you’re in the home medical equipment industry, home health, orthotics and prosthetics, skilled nursing or a wide range of other health-related businesses, there are a number of land mines that can significantly lower your payer contracts’ reimbursements if not handled properly.

One of the most common—and yet often misunderstood—potential dangers is the “lesser of billed charges” language that is found in almost all payer contracts. While the language may vary, the clause is usually worded something like this: “Payer will pay provider the lesser of its billed charges or its payer allowable for each codes’ reimbursement.”

What exactly does this mean?

Here’s an example: If your payer contracted rate at 100% including patient co-payment is $80 for current procedural technology (CPT) code 99501—a home visit postnatal code—but your billed charge is $60 for this code as defined in your chargemaster, you will be paid $60 per office visit rather than $80, your contracted rate. If this problem expands beyond just one code, or perhaps even pervades your entire chargemaster, then you could find that even though you have negotiated a terrific new contract, your claims are consistently paid at much lower than your contracted rates. In other words, you have met the enemy and the enemy is you.

What can you do to protect yourself from this outcome across all payer agreements?

First, it is highly recommended that you set your chargemaster at usual, customary and reasonable (UCR) levels for your company or practice. The goal is to pick a reasonable level of billed charges for all your CPT codes. In the absence of a specific accounting recommendation, a good starting point is about 250% to 300% of Medicare in most situations. This approach will ensure that your CPT codes are above your payer contracted rates, unless you have CPT codes that pay more than 250% of Medicare (and if you do, you are one of the fortunate few).

In all cases, make sure that your billed charges exceed the highest payer allowable rates in any of your current payer contracts. This approach has two benefits. First, it prevents your codes’ billed charges from being set below payer contracted rates. Second, you optimize your cash-based out-of-network business by ensuring that you don’t leave money on the table.

Also in the chart, the middle columns identify codes in red that have billed charges set at less than 250% of Medicare. These codes need to be adjusted up by the amounts specified in the column labeled “Diff between Rec. and Actual.” The column called “Possible Upside” reflects the additional revenue that would flow into the practice or company as a result of cash patients paying for these codes at their proper discounted UCR retail rates—that is, at the 300% of Medicare UCR level versus the lower current chargemaster rate. Note that this example includes rows for illustration only and does not contain all rows in the table. 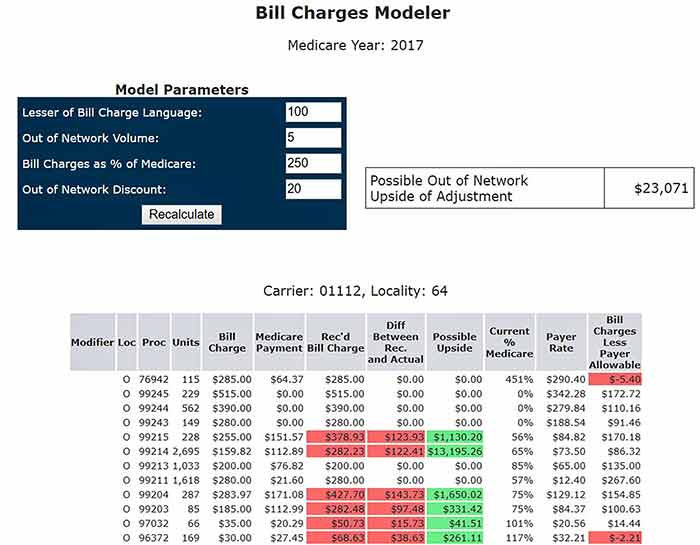 It is important to periodically audit your chargemaster. Once every six months should be a reasonable time frame to ensure that you’ll uncover new codes or changes to Medicare and payer rates for existing codes. Too often, practices set their chargemasters and don’t audit them for many years, if ever.

Since the “lesser of billed charges” language is present in almost all payer contracts, it is also imperative that you do a comparison to each of your payers, like the one in the chart. This will ensure that you cross reference your charges both to the rates of each payer and benchmark as a percentage of Medicare. Also, make sure to verify with your accountant that you balance write offs correctly with the UCR threshold that you select for your chargemaster rates.

In short, an easy way to maximize revenue on your payer contracts is to ensure that your chargemaster is set at your UCR thresholds, and always above the highest rate reimbursed currently for any code across payers. Periodically audit your chargemaster rates by CPT code and compare to your contracted rates by payer. Furthermore, it is important to have a consistent approach to setting your rates at a uniform percentage of Medicare—at least 250% or higher—to ensure that you don’t get bitten by the “lesser of” language.

Accreditation
How to Avoid Common Documentation Red Flags
Write it down, work it out
Home Health
A Pivot Point for HME
Helping patients shift from home health brings opportunity
Home Health
A Look at Care Synergy Network’s ‘Take Care of You’ Program
Overseeing a balancing act
Operations
Training & Coaching for Better Employee Retention
What really matters to your employees?
Operations
6 Ways to Achieve Growth Through Practice Management
A new perspective on your business