When Lt. J.D. Postage makes house calls as a community paramedic in Violet Township, Ohio, his goal is to ensure patients stay out of the hospital and have their basic needs met.

He’s part of the rapidly-evolving field of mobile integrated healthcare or community paramedicine (MIH-CP) finding a foothold in metropolitan areas as well as in rural communities. Goals range from reducing the number of hospital readmissions to keeping patients out of emergency rooms to signing up residents for Meals on Wheels.

When it comes to community paramedicine, a one-size-fits-all mentality just doesn’t fit.

For some patients, follow-up instructions after hospital visits can be a daunting task. Add to that issues with being low-income, and many patients end up right back in the hospital with more medical issues.

Climbing health care costs have led many EMS providers to put this new tool in their medical chest. Avoidable hospital readmissions cost an estimated $40 billion a year, according to a Department of Health and Human Services (HHS) report.

Heart failure readmission rates nationwide are more than 20 percent for cardiac patients, according to data published in 2017.

The Hospital Readmissions Reduction Program, mandated by the Affordable Care Act (ACA), gave an extra incentive to providers to cut those numbers. It requires the Centers for Medicare & Medicaid Services (CMS) to reduce payments to hospitals with excessive readmissions. Recent studies show readmission rates have declined since the program began, according to a CMS spokesperson.

But lowering re-admission rates is not the only goal for MIH-CP programs.

“It’s across the board in terms of what departments are doing,” said Scioto Township Fire Chief Porter R. Welch. As chair of the Ohio Fire Chiefs’ Association MIH-CP Committee, Welch helped draft and adopt legislation that permitted community paramedicine in Ohio. “It’s really based on the needs of the community,” said Postage, the only community paramedic on staff at Violet Township.

In 2016, Mount Carmel Health collaborated with first responders in four departments (soon to be five) to implement the community paramedicine program in central Ohio.

It started with heart patients, working to see what the triggers were causing them to go back to the hospital. “What are the common themes,” Postage said. “Are they taking medications right? Do they understand the diet?”

Now, Postage has developed resources throughout the community to provide whatever the patient needs. “I get referrals from apartment complexes, from the food pantry, from guys at the fire station, from doctors’ offices,” he said.

Churches are also on the front lines in providing volunteers and financial assistance for patients who need it. One church donates medical supplies. In Delaware, Ohio, “they’re doing something a little different,” Welch said. 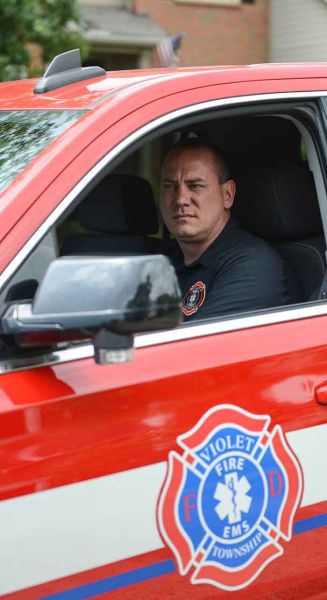 With no official community paramedic, EMS responders there take note when an elderly patient needs Meals on Wheels, help obtaining and taking medication, or transportation to doctors’ appointments. In those cases, a county-funded senior citizen program has an on-staff liaison who makes contacts and gets the patient in touch with proper services.

It’s the same approach taken at Welch’s department in Scioto Township. “It’s filling the gap in terms of what the community needs, and every community is different,” he said.

The biggest hurdle his department faces is “making sure we’re putting these folks in touch with the right social services.”

It began with scheduled home visits conducted with frequent 911 users, said Lt. Ben Thompson, one of two EMTs assigned to the program. “From there, we integrated ourselves in the greater health care community.”

Responders found a “multitude of issues being faced by our citizens upon returning home from the hospital,” Thompson said. “The harsh reality is that many in Birmingham are living far below the poverty line. For these folks, the problems never stop.”

So, it is difficult, if not impossible, to properly follow through with their discharge instructions. “What we do is try and coach them along so they don’t get sick again,” he said. It can be a task as simple as calling their doctor to schedule an appointment.

“Sometimes, they just enjoy having someone coming in to check on them,” Thompson said. “Everyone likes to feel important. Many of these people rarely have had that opportunity. So, if anything, this is our goal: To let every Birmingham citizen know that they are important and their health matters. Sometimes that’s all they need.”

Care Around the Nation

The Mayo Regional Hospital Emergency Medical Services in Dover-Foxcroft, Maine, launched its community paramedicine program this past May, as did Haywood County with the Haywood Regional Medical Center in Clyde, North Carolina.

Climbing health care costs have led many EMS providers to put this new tool in their medical chest. Avoidable hospital readmissions cost an estimated $40 billion a year, according to a Department of Health and Human Services (HHS) report.

Haywood Regional Medical Center sees a paramedicine program as a way to cut down hospital readmissions that are reimbursed at a lower rate by Medicare, Medicaid and insurance programs, The Mountaineer newspaper reported. Haywood County emergency officials also want to cut down on the number of calls from those who repeatedly use EMS for non-emergency situations.

In Bergen County, New Jersey, Valley Health Systems has seen more than 950 patients in their homes since launching its MIH in 2014, said Christina Pratti, RN and clinical coordinator. Their program works hand-in-hand with providers and the hospital to extend this home-style option of EMS, specifically for cardiac patients.

The team works with Valley Home Care and focuses on patients who refuse or don’t qualify for homecare services in order to fill in the gaps in care. And it’s working.

Pratti said her team’s ability to administer things like Lasix via IV at home while communicating with a patient’s primary care doctor has reduced the number of hospital visits and re-admits for congestive heart failure.

Funding for MIH-CP programs is as varied as the way programs are administered.

“There’s not a lot of consistent funding,” Welch said of the Ohio programs. In Delaware, Ohio, for example, the liaison is funded by a county senior citizen group.

Postage’s position is paid for by the Violet Township Fire and EMS Department, though they have a contract with Mount Carmel Health for some high-risk patients.

“Pretty much, the fire department foots the bill,” Postage said. “There’s no structure for patients to pay for the services so pretty much everything I do is free to the public.”

Birmingham C.A.R.E.S. took a big step forward recently when it negotiated a contract with UAB Hospital to conduct follow-up home visits on frequent Emergency Department users. C.A.R.E.S. will be compensated by the hospital for carrying out these home visits, Thompson said.

“We also have another large hospital system in negotiations to do the same for their patients,” he said. “The compensation piece was a huge achievement because now we can actually self-sustain our efforts. From what I know, we are the first in the state to negotiate such a contract.”

While it’s just a two-man shop for now, the department has plans to add personnel as the patient pool grows, Thompson said.

Community paramedics in Ohio go through additional training and 232 hours of clinicals, Postage said. “My program is mirrored through several other fire departments. We all work together,” he said.

Mount Carmel Health works with those departments in obtaining clinicals. A new program is being launched on stroke follow-ups.

“With each program we roll out, we do additional training,” Postage said.