An optimistic look at the latest data on mergers & acquistions
by Andre Ulloa
Monday, September 7, 2020

It took me longer than most to realize this pandemic was real. Despite a shutdown from Europe, canceled school for the kids and my wife looking into purchasing a spare refrigerator, I was still unmoved by the gravity of it all. Then I saw the ominous data coming out of Italy. The staggering statistics were more powerful than the images or articles. The data told a compelling and tragic story.

Obviously, data matters. And the data from the past few months of transactions demonstrates a surprising demand and strength in the health care industry, despite the current uncertainty of the overall United States’ economic markets. An increase in demand for home health and hospice, specifically, was one unexpected outcome of the pandemic. As people with underlying health issues were less inclined to go to the hospital or move into a nursing home, the pandemic heightened the importance of homecare operations.

Here at American Healthcare Capital, our deal flow actually experienced a large spike during the height of the initial COVID-19 cases, suggesting a surge in demand. From February to April of 2020, we saw a more than 200% increase in engagements to list companies for sale, as well as record levels of buyer interest in our current engagements.

However, deals that usually take four to six months to close are experiencing delays. This is most likely because certain home health and hospice agencies that needed to sell based on financial challenges like the new Patient Driven Groupings Model (PDGM) now have cash on hand thanks to grants from the Centers for Medicare & Medicaid Services and federal Paycheck Protection Program loans.

Based on past trends, we could assume the current deal volume will persist, even in the worst of times. In fact, with our recent engagements and continued traction in the market, we can assume a better year-over-year outcome for 2020 health care services mergers and acquisition (M&A).

Several of our clients remain busy in this time of crisis. This suggests strong operational viability—which is what investors focus on. The important takeaway is that if you can weather an economic storm the likes of which we have never seen and continue with the same numbers in relation to revenue, census, scripts or other financial metrics, you will maintain (or increase) your valuation even as other industries fall. 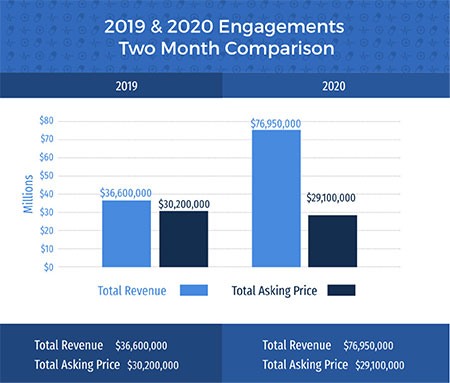 Image 1: A chart demonstrating the increase in transactions this year compared to the previous year, with a look at engagements, total revenue and total potential transaction value

Between Feb. 15 and April 15, 2019, our team saw three engagements signed to list companies for sale for a total of $36.6 million of revenue with a combined potential transaction value of $30.2 million. During that same time period in 2020, in the midst of the COVID-19 pandemic, we have seen more than twice as many engagements signed—a total of seven representing $76.95 million of revenue and a combined $29.1 million of potential transaction value. Several of our clients have maintained revenue throughout the crisis. This suggests strong operational viability. It is in this viability that investors develop confidence.

We do not use financial models to generate valuations because they are rarely accurate. Rather, the true indicator of value is comparative transactional data. We have determined the strength of the health care lower-middle market based on deal flow and closed deals. In that regard, the deal volume has continued unaffected by the current economic depression in certain health care segments we represent.

Despite our concern for the economic well-being of the nation over the longer term, we see a massive silver lining in health care services operations and M&A. In fact, at a time when virtually every other industry has inhibited capital deployment or acquisitions, lower-middle market home health and hospice—as well as behavioral health and pharmacy—appear to be as strong as ever.

Included here is actual valuation data of recently closed  deals and current deals in process in the relevant segments. These listings have been originated within past seven months. The list is presented for statistical analysis.

Note that valuations are typically based on either multiple of earnings before interest, taxes, depreciation, and amortization (EBITDA) or percentage of revenue. For each deal we have listed the more relevant metric.

The big concern for home health agencies at the beginning of 2020 was the potential impact of PDGM, which went into play in January 2020. With a pandemic-related public health emergency, clients and operators are being supported by CMS (as opposed to scrutinized) and patients have moved heavily toward home-based care and away from facilities and institutions. When initiated, PDGM was expected to decimate the financial viability of smaller home health operators. However, the nearly $34 billion in grants and accelerated payments that CMS doled out to providers at the onset of the pandemic have created a lifeline.

In fact, we have yet to find a home health or hospice agency that has used any significant portion of its grant monies for actual COVID-19-related impacts. The funds may be slowing down the number of sellers entering the market.

We know that it has delayed certain transactions as the parties resolve how the grant funds would be treated. Much of this depends on the forgiveness of all or part of this money. What we initially expected to enhance the M&A curve could turn out to be a curve ball if it keeps operators cash positive and makes them less eager to sell.

What we are certain about is that buyer demand for home-based care operations is robust and at an all-time high. Hospice multiples are hitting new records and homecare is seeing multiples return to previous highs. Investors acknowledge that home-based care is resilient under any stress and believe it will see massive growth in the years to come.

Andre Ulloa is a principal of Team M+A at American Healthcare Capital and has successfully represented sellers in a variety of healthcare segments including all types of pharmacy, home health, private duty, hospice, and behavioral health. His expertise is in all phases of the deal process and he attributes his success to his days as an operator. For more information on the home health and hospice industry’s response to COVID-19 or to reach Ulloa, visit healthcaredealteam.com.