Determining whether patients actually need a scooter is sometimes a difficult judgment call, even for physicians and rehab professionals. The blurry line between wanting and needing is often a key determinant of how patients pay for an item that has steadily grown in acceptance throughout the United States and abroad.

Whether it’s cash/retail, Medicare, or private insurance, the burgeoning scooter market is not going away. “You can even throw workers’ compensation into that mix,” says Cy Corgan, director of corporate sales at Pride Mobility. “There are a variety of areas and markets where scooters appear, but we have seen a migration to more of a cash business over the last few years.”

Corgan points out that scooters have always had an allowable under Medicare, but that allowable has been consistently reduced. With decreased Round 2 competitive bidding rates still scheduled to kick in on July 1, 2013, that inevitable trend toward the retail side is likely to continue. “Providers have really engaged the scooter product category as an area for them to make more money,” says Corgan. “It is a cash business, and providers can bundle a scooter with a lift or a ramp to create even greater revenue potential.”

Pride Mobility will still offer what Corgan calls a “competitive bidding” solution for the scooter market. “We have a product for allowables that are lower, that will fit into the parameters of competitive bidding,” he explains. “But again, we do see more providers moving toward and embracing the cash model.”

Jason Davis, vice president of sales at Golden Technologies, has seen the non-Medicare phenomenon take hold in 2013 with a “dramatic increase” in retail cash scooter sales. Davis says the foundation for the boost began last fall at Medtrade, when the company introduced the mobility version of its lift chair and the Golden Flagship Dealer Showroom program.

“This program had proven to dealers around the country that we could help them significantly grow their lift chair cash retail sales,” says Davis. “The new Golden Flagship Dealer Showroom program is already proving itself to our dealers by dramatically increasing their retail cash scooter sales over last year.”

Golden is expanding retail cash sales by venturing into the aesthetic side, offering different shroud 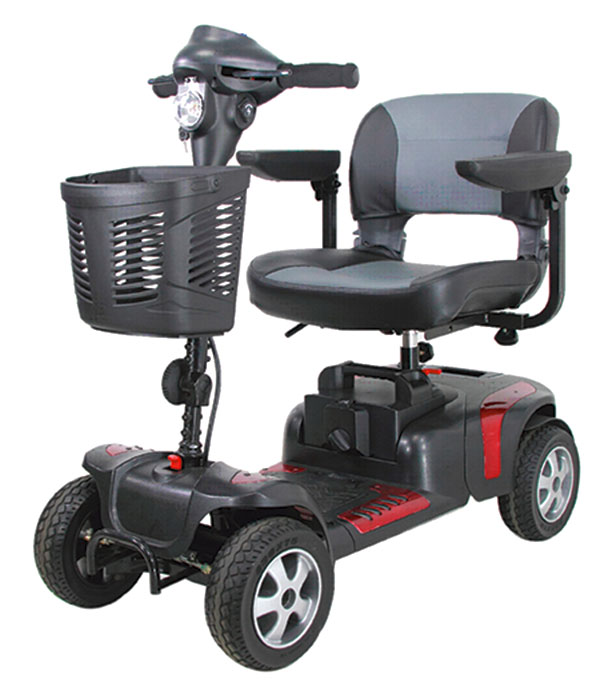 colors on two of its most popular three-wheel and four-wheel scooters. “For those who aren’t doing retail, you need to approach your vendors and ask what programs and products they have to help you start the retail cash portion of your business,” says Davis. “If they can’t or won’t help you, find a vendor who can.”

Meanwhile, Davis acknowledges that competitive bidding will continue to affect the “low end” scooters. “Dealers will be looking for the lowest price due to reimbursement,” he says. “There is no set ceiling in retail sales. You can make as much of a profit as you wish, providing you have a sharp looking, quality scooter and an educated selling staff.”

Philipp Preugschas, business manager of consumer power chairs and scooters with Invacare, agrees that competitive bidding’s lowered fee schedule will make the reimbursement market less attractive for everyone—manufacturers, providers and consumers. “Most consumers will have to accept that because they do not have a choice,” he says. “But some consumers have enough disposable income, and a distinct idea of their personal preferences, that they would rather look for mobility devices that fit their individual needs and then purchase them privately.”

Once the competitive bidding fee schedule comes into effect and the “lower standard products” enter the market, Preugschas contends that the retail movement will continue to gain momentum. “Providers should jump on the retail bandwagon,” he says. “Invacare is addressing this need with a cash-sale-only product, which launched at the beginning of this year. That said, a single product will not be completely effective on its own, but should be embedded in a complete marketing approach including collateral material, retail displays and complementary product offerings.”

Corgan agrees that consumers want selection, a consideration for virtually all products in and out of healthcare. “If you are going to purchase a TV from Best Buy, you don’t want to walk in and just see one TV,” he says. “You’re going to see walls of TVs. So the better selection you have, it really is going to translate into increased sales. That’s what makes it more important than ever to align with a manufacturer who can help providers create that economically sound patient-first business model.”

Earlier this year, 150 federal and state agents raided the Texas headquarters of The Scooter Store, the nation’s largest provider of power mobility devices. An article in The Atlantic Wire (widely reprinted on YahooNews), reported that the “massive raid” was part of a federal investigation into “one of the biggest perpetrators of government fraud in America.”

A month later The Scooter Store filed for bankruptcy, listing liabilities between $50 million and $100 million. The question soon became: Can providers capitalize on these misfortunes? “The Scooter Store situation is interesting in that their loss will provide an opportunity for other providers to pick up their sales,” says Mike Wahrmund, director of marketing, power mobility, at Drive Medical Design & Mfg. in Columbia, S.C.

Ubiquitous TV commercials generated sales leads for The Scooter Store, and it remains to be seen whether providers can ethically take up this model on a local or national basis. “With their huge emphasis on advertising, The Scooter Store created a great deal of scooter demand,” says Wahrmund. “We’ll have to wait and see if any other providers take up that banner.”

Thus far, providers have largely felt the brunt of lower scooter reimbursements, but Wahrmund says that pain will likely soon be shared by manufacturers. “The industry now has an abundance of manufacturers offering scooters,” he says. “I expect that we will see some of the weaker manufacturers exit the scooter industry over the next 12 months. Several providers are also exiting the industry rather than adapt to the new market realities, and many more simply can’t survive.”

With the cautionary tales of The Scooter Store’s Medicare dealings still reverberating, how much time and energy should providers spend on the Medicare market? Is it even worth the risk? Cy Corgan believes that “creating awareness and demand” can and should be done ethically on the Medicare side, and this practice can also be effectively directed toward the cash side of the business.

“Medicare is still one of the largest payer sources for the industry, so it is certainly an important aspect of the business,” says Corgan. “Providers must look at creating awareness and demand, and moving away a little bit from the side of the business where consumers are walking in with a prescription. Create awareness and demand through best practices and reach out to the consumers to get them to walk through your doors. You have the selection, the brand and the service after the sale. You can also have expertise from a trained staff to meet consumer needs. Medicare plays a part, but more providers are taking the initiative and creating demand on the retail side.”

Alec Lin, general manager of Heartway USA, believes scooter sales in the Medicare realm will continue to decrease, with providers viewing the payor as simply not worth the effort. “Lots of providers are giving up on government reimbursement business revenue,” says Lin from his Fort Myers, Fla. headquarters. “Businesses from other industries are stepping into this mobility business to have a share—which is good. That actually shows the growing potential of the overall mobility scooter market.”