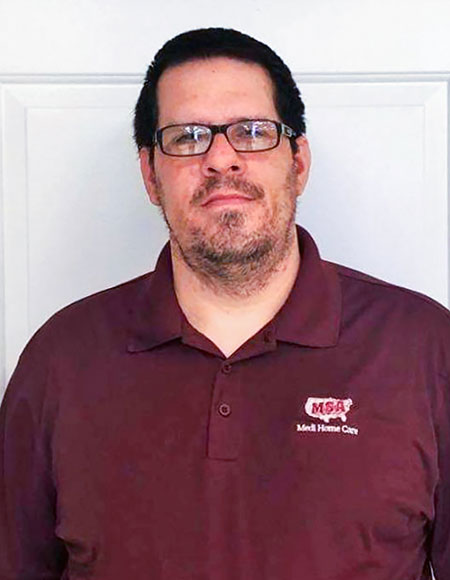 There probably aren’t many home medical equipment (HME) service technicians out there who also happen to be volunteer firefighters, partially trained as EMTs, certified in security—and also 6’4”, almost 300 pounds and able to smash their way into a burning house with nothing more than a boot.

But there is at least one: Jason Powers, who put his skills to work earlier this year when he helped rescue a disabled man from a burning home while out on a delivery in rural Virginia.

Powers and his co-worker at MSA Home Care, Service Tech Matthew Shane Osborne, had been trying to deliver a bariatric bed for several days but weren’t getting a response, so they decided just to head out. As they neared the house, Powers, who’s always on alert because of his volunteer firefighting experience, noticed a few wisps of smoke further up the hill.

He couldn’t figure out how to drive there so he sprinted up to the house, which looked abandoned. He called 911, and a local volunteer firefighter arrived in his personal vehicle and told Powers that the home was, in fact, inhabited.

“Automatically my mind switches to ‘we need to search this house.’ We don’t have any gear between us but we sprint back toward the house and hear glass breaking. We yell out, ‘call out to us, where are you?’ and we see something fly out of the window.”

The man inside was an amputee with one leg who had fallen out of his wheelchair and become delusional, likely from smoke inhalation. He fought off his rescuers, thinking they were attackers. It took Powers 20 minutes to convince him they were there to help and allow them to carry him out on a stretcher.

The craziest part of the story, Powers says, is that they were still unable to deliver the bed because, it turned out, they had an outdated address for the client they were trying to take it to.

“Something put us there that day at that time,” Powers said.

In fact, you could argue that it’s pure providence that Powers ended up in homecare at all. He has worked many other jobs, including as a member of the Safety Service Patrol for the Virginia Department of Transportation and as a hospital security officer. It was there he met one of MSA’s respiratory therapists, who urged him to take the job.

“I actually didn’t know a lot about it, but then once I came on board here it was pretty simple to understand,” Powers said.

Now, he’s likely to go above and beyond the basics for his patients, troubleshooting home oxygen machines and other complex equipment. His small office—“literally four people, and we’re all friends,” he explains while being ribbed on his end of the phone—covers western Virginia and also parts of West Virginia and an area near Pikeville, Kentucky.

Powers gives regular customers his phone number and encourages them to call any time they have problems with their equipment.

“I tell patients I don’t care if it’s two, three o’clock in the morning,” said Powers, who in some cases will also check in on patients on his long drive back to the office. “I’m not afraid to come out at two in the morning if you think there’s something wrong with your machine.”

In one case, a patient’s husband was having a medical issue after hours but rather than calling MSA’s home health and hospice office, he’d simply call the HME number—because that’s the one he knew by heart. It doesn’t matter to Powers, who said he’s always been up for serving people and even saw his security job as such.

“I love helping people,” he said.

Read about our other finalists here.