Get the most out of payer negotiations
by Steve Selbst and Susan E. Charkin, MPH
Wednesday, January 27th, 2016

In this article, we will examine three analytical techniques for increasing your commercial payer contract reimbursements: 1) use weighted averages to calculate your reimbursements; 2) avoid the infamous “lesser of billed charges” or contracted rate problem and 3) focus on your most important codes.

When negotiating payer contracts, it is key to do your own data analysis of your contracts to effectively increase your reimbursements. This work should be done up-front, prior to negotiating any contracts. Always rely on your billing system and your data to determine your revenues.

While payers track revenues, too, and can provide you this information, it may not be consistent with your own internal tracking data. You should be able to find the exact fee schedule that a payer is currently paying for your practice. You should plan to spend at least 50 percent of your time and effort determining your key codes—roughly the top 20 percent of your codes that drive 80 percent or more of your revenue—and analyzing these key codes. For many practices this will be around 20 to 40 Current Procedural Terminology (CPT) codes.

By applying these three techniques, you will put your practice in a much stronger position to increase payer contract reimbursements. You will have a well-thought-out strategy in place for your contract negotiations.

Many practices work on their own broad hypothesis and approach for negotiating payer contract reimbursements. The problem in doing this is there are many land mines that can bite your practice—including unexpected revenue declines from newly-negotiated agreements. If you follow the advice and concepts behind the three areas examined in this article, you will be very effective in assessing the impact of payer fee schedule changes and proposals to your practice. You will also be very effective in using data and information to maximize your contract reimbursements in payer contract negotiations.

When you are assessing the percentage of local Medicare rates represented by a payer’s fee schedule in aggregate, it is important to normalize the calculation across your fee schedule to take into account the revenue produced by each CPT code, i.e., the volume performed times the payer rate at 100 percent including patient co-payment and co-insurance versus the Medicare revenue produced by that code at the same volume. Otherwise, you will calculate an average, which is calculated by summing each percentage of Medicare by CPT code and dividing by the total number of codes.

The problem with using averages, instead of weighted averages when assessing a payer’s fee schedule is that the average does not take into account the relative revenue importance of the code. The average treats all codes equally whether they produce $1 of revenue or $250,000 of revenue. Many payers will show you impressive fee schedule changes that show your average reimbursement as a percentage of local Medicare rates increasing across a broad fee schedule. The problem is the codes that you care about most are the ones producing the most revenue. All CPT codes are not created equal. Revenue contribution must be used as a differentiator.

The example in Figure 1 illustrates the importance of using weighted averages. In this example, the average percentage of Medicare, in aggregate, for the two codes combined is 178.5 percent. This is what the payer will tell you and this is accurate. The only problem is your real average reimbursement, or the weighted average, is actually 137 percent. When you average the reimbursement across these two codes, the 266 percent associated with code 77418 is weighted the same as the 91 percent associated with CPT office visit code 99213. What is not factored into the average calculation is the Medicare revenue and the actual revenue value of the code based on the payer contracted rate. In this case, the Medicare rate is higher than the payer rate for CPT code 99213 while the Medicare rate is much lower for CPT code 77418 than the payer rate. (See the formula and calculation in column H.) The average places too much importance, in this case, on CPT code 77418. Since it has such a high payer rate relative to its Medicare rate, it generates a very high percentage of Medicare reimbursement—266 percent. As can be seen in Figure 1, the real rate, taking into account a weighted average, is 137 percent of Medicare.

If this were a real payer contract negotiation, we should be negotiating up from this 137 percent, not 178.5 percent. Further, the payer may be averaging across all CPT codes in our fee schedule, not just the top revenue producing codes. The outcome, in cases like this, would be skewed against you. It is not that the payer is wrong for telling you that the average rate of reimbursement is 178.5 percent. Rather, it is wrong for you to base your negotiation on the average, because the average does not account for the revenue impact of each code. It is best to use weighted averages to maximize your reimbursements.

Technique 2: Avoid getting bitten by the “lesser of” language present in most commercial payer agreements.

In the last 15 years, Healthcents has successfully negotiated over 10,000 payer contracts for all sizes and shapes of practices. One of the most common operational language clauses in payer contracts is referred to as the “lesser of billed charges” clause. While the language may vary slightly from agreement to agreement, the clause is usually worded like this: “‘health insurance company’ will pay provider the lesser of its billed charges or its payer contracted rate for each CPT code reimbursement.” What does this mean, exactly, and why is this important?

What this means is for example, if your payer contracted rate at 100 percent including patient co-payment is $110 for CPT code 99213, a routine outpatient 15 minute office visit code, but your billed charge is $90 for this code as defined in your charge master, you will be paid $90 per office visit rather than $110—your contracted rate! If this problem expands beyond just one CPT code, or perhaps even pervades your entire charge master, then you could find that, while you have negotiated a terrific new contract, your claims are consistently paid at much lower than your contracted rates. What can you do to protect yourself from this outcome across all of your payer agreements?

It is highly recommended that you set your charge master at Usual, Customary and Reasonable (UCR) levels. In the absence of a specific accounting recommendation, a good starting point is about 250 to 300 percent of local Medicare rates. This approach will ensure that your CPT codes are above your payer contracted rates. The point is to pick a high enough reasonable level of billed charges for all of your CPT codes. This approach has two benefits. 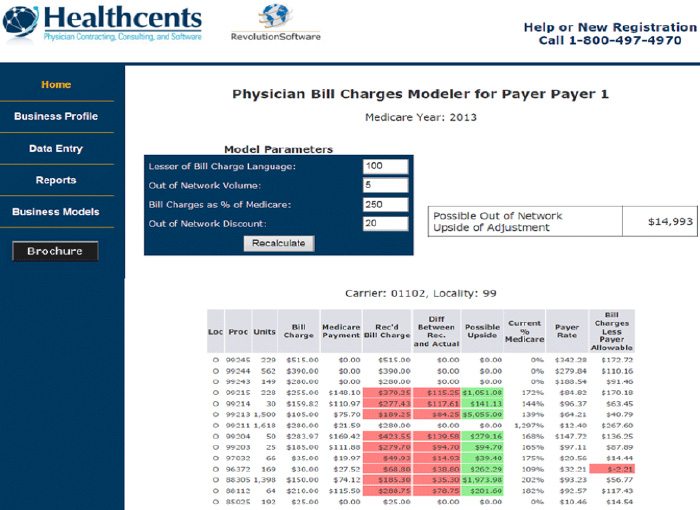 First, it prevents your CPT code billed charges from being set below payer contracted rates. Second, you optimize your cash-based non-par business by ensuring that you don’t leave money on the table (see Figure 2). In this example, in the far right column titled, “Billed charges less payer allowables,” there is one CPT code flagged in red. This code has a payer contracted rate that is less than the billed charges and needs to be adjusted up by the negative dollar values specified in this column to avoid being reimbursed at the lower billed charge rate rather than the contracted rate. In this case, the contracted rate for code 96372 is $2.21/service, rendered higher than the billed charge rate. If this problem pervaded your entire fee schedule, you would have negotiated higher rates with the payer, but you are being under paid because your charge master is set too low. It is important to do this comparison for all of your top revenue producing CPT codes.

In this example, the middle columns identify codes, in red, that have billed charges set at less than 250 percent of Medicare rates. These codes need to be adjusted up by the amounts specified in the “Difference between Rec. and Actual” column to make sure that they are set at 250 percent of Medicare, the desired UCR level for each code.

The “Possible Upside” column reflects the additional revenue that could flow into your practice as a result of cash patients paying for these codes at the 250 percent of Medicare UCR level versus the lower current charge master rate in the “Bill Charge” column.

This demonstrates the importance of periodically auditing your charge master. Once every six months should be a reasonable time frame to ensure that new codes or changes to Medicare and payer rates for existing codes will be discovered. Because the “lesser of billed charges” language is present in almost all payer agreements, it is also imperative that you do a comparison for top codes for each of your payer contracts. This will ensure that you cross reference your charges both to the payer rates of each payer and benchmark as a percentage of Medicare. Also, make sure to verify with an accountant that you balance write-offs correctly with the UCR threshold you select for your charge master rates.

Technique 3: Focus on your most important codes.

Your important codes are your top revenue codes. There is often a tendency to analyze data on payer contracted rates for all codes or for the wrong codes. When you try to gather data for all codes, you waste a lot of staff hours digging up data on codes that have little effect on your revenue. Further, if you try to analyze a total fee schedule of several hundred codes or more, and you do not have volume data specific to every code, then you will fall into the land mine of using averages instead of weighted averages. This means that you will not know the real effect on your revenue based on the payer’s fee schedule changes. Remember, revenue—and therefore, code importance—is a function of the product of payer rate times volume. You cannot work with payer rates and volumes in isolation. For example, if you have a lab code that is 50 cents and you administer it in an in-house lab 2000 times, the importance of this code is $1000 total. However, if you conducted 2000 office visits at $100, you would be making $200,000. Both codes have the same volume but different revenue results due to pricing.

Also, make sure that you do monitor your actual revenue to be sure that it is consistent with payments at contracted rates. When applicable, take into account the effect of bi-lateral and multiple procedure reimbursement rates on your revenue.

Remember: always work with weighted averages; fully analyze your charge master to be sure that you do not fall victim to the “lesser of” language and that your billed charges are set at  high enough UCR thresholds; and work with your most important codes to assess the impact to payer fee schedules.

Note: The analytical examples in this article were taken from Healthcents, Inc., cloud-based product RevolutionSoftware. For more information visit them here.

Operations
How to Shift Your Employees' Focus to the Customer
Boosting retail sales margins
HME Products
Lighter, Brighter, Cleaner
Fighting germs in the home with light
Aging in Place
Assessing 5 Needs of Solo Seniors & How to Help Them
How baby boomers are changing the aging in place landscape
CMS/Medicare
Understanding Place of Service Requirements Under Medicare Part B
Billing for DME following a nursing home stay
Operations
Getting From Here to There in 2020
A 4-step strategic planning process to optimize your business