How to Expand Your Revenue Sources by Working with Complementary Payers 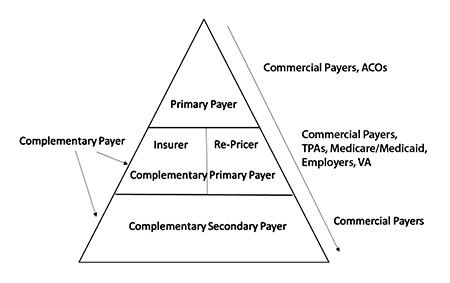 A Hierarchy of Needs

In the diagram, the top part of the triangle represents the usual primary payers that you likely contract with, such as Blue Cross Blue Shield, United Health Care, Aetna, Cigna, et al.

The middle level of the triangle represents other primary payers who put in place complementary direct preferred provider organizations (PPO) agreements, Veterans Care agreements, Medicare and Medicaid agreements and third party administrators (TPAs). The companies that fall into this category are often not as well known, but may have substantial networks and membership coverage. These are typically “re-pricers” that sell their networks to payers who pay claims. For example, there is one such payer that covers as many as 2 million people nationwide, with as many as 400,000 beneficiaries in a single state.

Usually, there will be a logo on a patient’s health insurance identification card indicating participation in a specific secondary network. You will need to verify their member benefits to be sure that the secondary network benefits are in place.

Reimbursement outcomes will vary based on the patient’s benefits, the payer and the state the patient is filing in. The complementary primary payer plan will usually mirror a primary plan and pay around 80%, while the patient will be responsible for 20%. Also, as with any plan, the maximum out-of-pocket expenses, patient deductibles and coinsurance payments will apply.

While complementary direct payers may be health insurance companies (or health plans) or re-pricers who sell their networks to health plans while the payers pay the claims, it is important to understand this distinction so that, when the time comes to get your claims paid, you will have a clear path to working with the payer and/or complementary network manager to get reimbursed. It is important to recognize complementary payers who are re-pricers, since re-pricers lease their networks to payers. There are many benefits to providers including broader network access and higher percentages of payments derived from members. Members of complementary networks benefit since they have broader network access at discounted provider rates.

Complementary Payers as Part of a Contracting Strategy

Lewis Carroll wrote, “If you don’t know where you’re going, any road will get you there.” How true this is when it comes to payer contracting. Before you dive into contracting with any payers, whether direct or complementary, you must first step back and define your contracting strategy. Then, like puzzle pieces fitting together perfectly, complementary payers can be a part of the contracting plan. It would be a very rare case where the only contracts that you would choose to put in place would be complementary payers.

Complementary payers are a key part of a complete payer contracting strategy and plan. They may be used to plug gaps where you were unable to get primary payer agreements and/or may be put in place to complement existing agreements to broaden your network participation and generate a greater volume of customers.

Steve Selbst is the CEO and co-owner of Healthcents Inc., a large national payer contracting company, and is an expert in payer contracting and online marketing. Selbst can be reached at (800) 497-4970 or at info@healthcents.com.