What Is the Value of Your DME Business? Skip to main content

What Is the Value of Your DME Business?

Most owners of a durable medical equipment (DME) company can readily estimate the value of their company. Unfortunately, their estimates are usually wrong. Common threads among DME company owner valuation statements include: “All DMEs sell for two times annual revenue,” or “My DME should be worth the sum of all of the monies I invested into the company,” or “I wouldn’t consider selling my DME for less than 10 times annual profits.” Those who make these statements are in for a rude awakening when they attempt to sell their company or engage a skilled health care valuation professional. Although most owners of DME companies are pretty smart, the value they have in their head for their company is almost always incorrect. Here’s why:

Ultimately, the value of any company is how much someone else is willing to pay to own it. As business valuators, the best we can come up with is an estimate of market value. Although there are numerous valuation methods, the most prevalent that are used to value going-concern businesses are the comparable transaction analysis (market approach) and discounted cash flow analysis (income approach).

A more reasonable estimation of value can be determined using a discounted cash flow analysis where future cash flows are projected and “discounted” back into today’s dollars. For example, if a company is expected to earn $500,000 a year in cash flow for the foreseeable future, the value of the company would be $2,000,000, assuming a discount rate of 25 percent.

The challenge with the discounted cash flow analysis (income approach) is accurately projecting future company cash flows and accurately determining the discount rate. The discount rate should reflect the riskiness of the company. Most company owners underestimate the riskiness of their company. For example, an owner of a small, privately held company once told me that his company was no riskier than industry-related companies on the S&P 500 index.

A reasonable estimation of value can be determined by looking at past sale transactions of comparable companies. For example, if you found 20 companies of similar revenue and earnings that sold for four times EBITDA (earnings before interest taxes, depreciation and amortization), you might compare those past sale transactions to your EBITDA. You might also compare the sale price of the past transactions to annual revenue of those companies, and compare the same percentage to your company’s annual revenue. 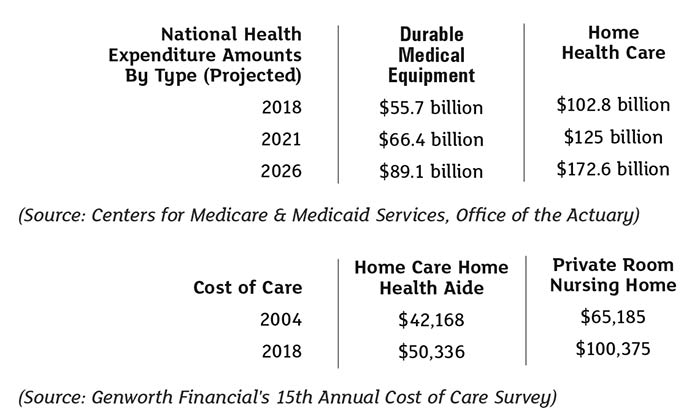 The Market Multiples (Valuation) graphic above contains current market values of DME companies. Note that the actual market value of your specific DME company may differ from the multiples in the graphic based on other factors, noted below.

Accreditation
How to Avoid Common Documentation Red Flags
Write it down, work it out
Home Health
A Pivot Point for HME
Helping patients shift from home health brings opportunity
Home Health
A Look at Care Synergy Network’s ‘Take Care of You’ Program
Overseeing a balancing act
Operations
Training & Coaching for Better Employee Retention
What really matters to your employees?
Operations
6 Ways to Achieve Growth Through Practice Management
A new perspective on your business