I was recently on vacation with my wife and friends in San Miguel de Ayende, a mountain community in Mexico that was established in the middle of the 16th century by Spanish conquistadors. Flash forward 450 years, and the town is a thriving artist enclave, a cobblestoned cultural oasis that is the home to creative souls from around the world. Fine artists, film celebrities and musicians seem to find the city and its surroundings an environmental muse.

As we were walking to dinner, we passed an antique store, where a riotous-colored poster caught my attention: Doc Severinsen was performing with his band, San Miguel Five, at a nearby art institute that evening. My mind flashed to images of Doc and Johnny Carson—nostalgia and a touch of home flooded my thoughts.

We attended the high-spirited performance, and then went up to talk to Doc afterward. He told us he came to San Miguel a decade earlier to attend a friend’s wedding, fell in love with the place, went home, sold his ranch in Santa Barbara and moved here. But here’s the point: Doc looked to be in his mid-sixties. In fact, he was 86-years-old when we saw him perform that night.

Now, I am not promoting San Miguel as a fountain of youth; I am simply making a point you already know: Doc Severinsen blowing his trumpet in a cabaret in the Central Highlands of Mexico is representative of the ongoing boom in life expectancy—a boom that is driving the industry of which you are so vitally a part.

A study by iHealthbeat.org (read it here) revealed that “in 2000, the proportion of U.S. residents ages 65 and older was 12 percent, or 35 million. By 2020, the percentage of the U.S. population ages 65 and older is expected to increase to 17 percent, or 50 million Americans.” Check out this graph of life expectancy in the last 120 years. Five years is a blink in time. 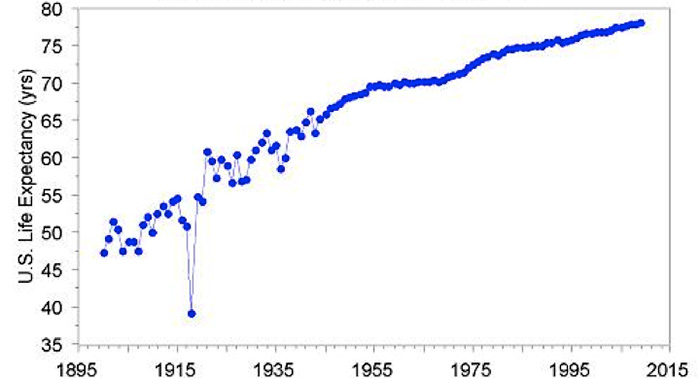 It is not as if the industry doesn’t know: in 2000 there were 13 home health franchises, as of 2014 there were 56—a rocket ride. The industry’s income growth is riding the same rocket. 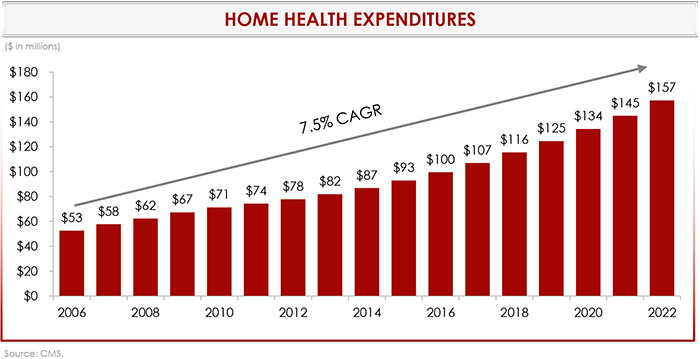 You’ve likely seen these statistics or similar ones and while one can marvel at the positive aspect of the eye-watering revenue growth, the other side of the life expectancy coin is that the competition in home health care has gotten fierce and will likely continue to be so. All of which puts a premium on your ability to promote your brand, be it a national franchise or an independent endeavor. But this an interesting comparative: A marketing sector that has grown even faster than the Home Health Care industry in the last few years is that of online reviews posted at rating sites. Surprisingly, many business owners and managers are not fully aware of the impact of online reviews have on attracting new customers or, unfortunately, diverting potential consumers to other brands. There is, in fact, a marketing misconception among business owners regarding the most trusted form of promotion. Review, Inc. conducted two surveys in May/June of this year. First, they conducted a survey of 1020 business owners, executives, and marketing managers. They asked them to identify which advertising medium they believed was the most effective for their business. In other words, on what marketing channels were they spending money. Here are the results. Perhaps not surprising to you. They then surveyed 1,000 consumers. The survey gave them the choice of the same advertising channels and asked which of them they trusted the most. Surprise. It shouldn’t be a surprise because:

That’s right, a 2014 survey by BrightLocal of 2,100 consumers regarding their attitudes about online reviews found an eye-popping 88 percent of them said they trust online reviews as much as personal recommendations. (Note the rapidly descending “No” graph. It declines from 33 percent in 2011 to 13 percent in 2014. See the entire study here.)

It’s not fair, really, but one disgruntled/snarky rating can turn away untold numbers of prospects.

The following is from an article by Al Ries, author of Positioning the Battle for Your Mind—voted the greatest marketing book of all time by the readers of Advertising Age (The industry bible). “The general rule is: publicity first, advertising second. (PR plants the seed. Advertising harvests the crop. “The truth is, advertising cannot start a fire. It can only fan a fire after it has been started. To get something going from nothing, you need the validity that third party endorsements bring. The first stage of any new campaign ought to be public relations.”

Online reviews have become the very heart and soul of third-party endorsement. Love them or hate them, it is a fact of life for those in business today. A recent Nielson study of 28,000 respondents in more than 50 countries showed that online reviews are the most trusted from of advertising after personal referrals. Study after study has shown that reviews are the most critical element in making a business or service selection.

Here are some graphs based on surveys by BrightLocal that further make the point. How many times have you used the internet to find / search for a local business in the last 12 months? (Only 9 percent say “Never.”) Do you read online customer reviews to determine whether a local business is a good business? Only 8 percent say “No.” And notice the steep decline in the “No” graph on the right. The point? Online reviews on rating sites have become a major force in marketing – particularly for a locally based business. Which begs the question, how do you take advantage of this trend and become proactive on this line? May I make a self-serving suggestion? Get a professional to help you take advantage of the potential marketing power of online ratings and reviews.

First of all, be sure to engage a team that truly cares about your success and works closely with you and coordinates with other marketing efforts that may be in progress. Utilize a program that locates all of the places where you are rated online. It is probably more than you think. Yes, Yelp is arguably the best-known brand, but Google Business is actually bigger and covers more. And it goes far beyond these two. A good reputation management program will scan up to 70 different rating sites and see if you are rated and if so, how. The program should then return a report to you that displays where you are rated and how you are rated. This should be displayed in an easy-read format, like the dashboard of a car or the bridge of the Starship Enterprise.

A good initial action to get an immediate spike in positive reviews is for the program to send an email to your data base of current or past clients informing them that you are updating your social media program and would love to have their feedback on your service. Can you please tell us how you would rate our services on a scale of 1 to 5 stars. Those that send back 4- and 5-star ratings should then get a follow up email and ask them if they would be willing to post the review on, say, Yelp, or wherever the original research indicated it would best be placed (one or more). If yes, all they need to do is click a link and boom! It’s posted. The program should also enable the ratings to be posted on your website, Facebook page and Twitter feed.

A side benefit of such a program provides a quality control function in that if a low star response is returned, you have the opportunity to handle it before the person might post it online. Assuming your service is good, the real solution to a poor review is to bury it with good ones. Besides the initial blast generating a handsome increase in 4- 5-star reviews, the program should then engage in the same procedure with each of your ongoing clients as a continuing source of strong reviews for each new client, as appropriate time wise.

It is a PR world, today—an online PR world. Neglect it at your peril. Be proactive and flood the online rating sites with a tsunami of positive reviews about your agency. Having a reputation management service that embraces the above elements is like putting a 24-hour online PR firm to work for you constantly signing your praises to potential clients.