Handicare’s FlexiGrip assists users with pulling up from a lying to sitting position.
Industry experts say the cash market for these items is already good—and will only get better
by Dave Parks
Wednesday, September 24th, 2014

HME manufacturers offer a wide variety of lifts and transfer devices. Clients often pay for these products out of pocket, although some lifts and transfer devices are reimbursable through Medicare and other insurers. Industry experts say the cash market for these items is already good, and will get better. Like many HME products, basic lifts and transfer devices were originally developed for institutional use. They were primarily designed to prevent workplace injuries, but in the home setting they provide much more than safety. “What has traditionally been thought of as an injury prevention tool is now being thought of as an adjunct to many mobility devices,” says Steve Ingram, director of clinical services at Prism Medical. “It’s great to have power wheelchairs, but if you can’t get in and out of them, what’s the point?” Ingram says his company sells institutional products, such as ceiling lifts, and has also engineered smaller lifts for the home. “We’ve introduced home care products that are half the price of traditional products,” he says. Generally, institutional lifts have a 1,000-pound limit, and residential lifts often have a 300-pound limit, he says. Many lifts work with basic hydraulics. A key component for most lifts is the sling. “Anybody who is looking at getting into this market, make sure you deal with a vendor who understands the slings,” Ingram says. “Make sure there is a selection of slings that meets everybody’s needs. You have to understand the sling. It’s the link between the hard product, the technology and the client. It’s the part that gets missed too often. It is the part that presents the highest risk.” Also, providers must deliver education along with these products. Some clients don’t use lifts after they purchase them because they just don’t feel comfortable with them. “They feel there is less work doing it the old way. You have to deliver that education in a way that encourages comfort.” 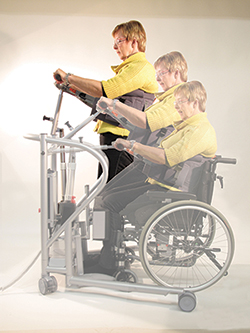 The Handicare MiniLift200 is a mobile sit-to-stand lift that helps users gently rise from a seated position.

Fran Spidare, business manager for safe patient handling at Invacare, says much of the lift market is still funded through traditional reimbursement, which typically means the less expensive mechanical lifts. But that’s changing. “We are seeing more privately funded battery-operated mobile lifts and even ceiling hoists for longer term care at home,” Spidare says. Invacare recently introduced a new line of ceiling hoists. “We have taken the complexity out of ordering these systems,” Spidare says. “Our I-Transia ceiling hoist system solutions make caring for a loved one at home much easier than using a mobile floor lift, especially in small rooms.” Emily Berman, product manager for Medline’s durable medical equipment division, says the trend is toward smaller, more portable products for home use and even traveling. “Expect to see lifts that encourage mobility and are easier to transport,” she says. “There is also a focus on helping lift-dependent individuals to be more mobile so they aren’t homebound.” This year Medline introduced a foldable lift, which can be easily transported in a car or truck. Berman says Medline’s hydraulic lift features a six-point cradle and locking brakes for added safety. Its powered lifts come in a variety of weight capacities: 400, 450, 600 or 700 pounds, she says. Medline and other companies offer a variety of lifts and transfer devices. Hans Sigvardsson, president of Handicare, says his company produces lifts and transfer devices that range in price from $100 to several thousand dollars. “We typically have two or three solutions for every problem,” he says. “We have a bunch of small products that don’t require electricity. They are very simple.” For example, his company offers a device called a FlexiGrip. It looks like a small, flexible Jacob’s ladder, and clients use it to pull themselves up in bed to a sitting position. 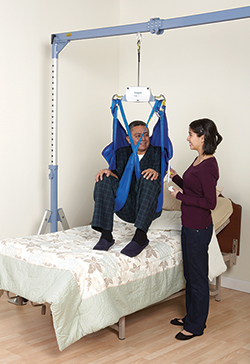 The Prism Medical P-300 Portable Ceiling Lift is the lightest one on the market.

John Wright of Shoprider Mobility Products says niche products can be profitable. His company offers a transfer device that was formerly marketed under the Barton brand. “This is a product that is a chair, but it is also a transfer device for people who can’t transfer on their own,” he says. A sheet goes under the patient and hooks to a crank rod mechanism. It laterally transfers the person from the bed and into the chair, which then can be used as a gurney or recliner. “It’s a niche,” he says. “It’s on the Round 1 Recompete, but it’s not on Round 2. So any Medicare provider can put this out and get reimbursed. It’s a cap rental, about $7,000 over 13 months.” Damian Enneking of Bestcare Lifts says the market for lifts and transfer devices is growing for three reasons:

HME providers thinking about entering this market should consider the cost of purchasing equipment so they have it available for demonstration and design. “Unfortunately, for some of them that’s an investment they’re not willing to make, but that’s really important. You have to design the solution for the patient, and that requires you to have the actual equipment to do that.” Generally, a provider can get by with three major pieces of lift equipment, he says. But there is far more available. “We’re looking to be a complete patient-handling company from A to Z, dealing with all the different lifting and transfer problems,” he says. “We’re looking at doing that in a way that is affordable for the end user. We’re kind of a value proposition as far as overall pricing.”

There is one segment of the lift market that has grown much in recent years, but still has untapped potential. It is pool lifts. 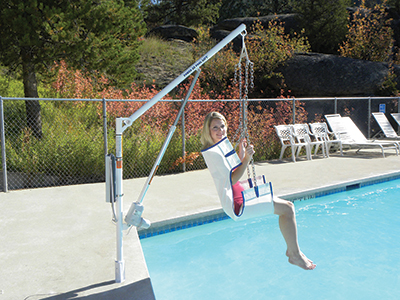 Bruce Giffin, national sales manager at Aqua Creek Products in Missoula, Montana, says his company experienced increased demand after the Americans with Disabilities Act (ADA) required commercial pools to have lifts beginning in 2010. “We specialize mostly in pool and spa lifts,” he says. “The market has been very good recently because of the ADA requirement.” The law included some flexibility, and therefore there is still a backlog of commercial pools that need lifts, he says. Most of these commercial products are sold through large contractors and pool dealers. However, the installation of commercial pool lifts has sparked interest in residential pool lifts, which are sometimes handled by HME providers, says Giffin. “With the ADA pushing the commercial side of it, we have people calling and saying, ‘Hey, I saw your lift at my motel. How do I get one at my own pool? I didn’t know that existed,’” he says. Thus, Giffin believes the home pool lift market will grow as people become more aware of the products. Pool lifts are a fairly complicated product, and installation must be correct, he says. “This is a product that has some liability,” he says. “Not one lift fits every person. And there are some criteria you have to determine from the pool. Every pool is different—the pool profile, whether there’s a raised wall around the pool, above-ground pool or below-ground pool.” The company helps educate dealers, but there’s still a learning curve, he says. Hot spots for pool lifts are just what you’d guess—hot spots. Warmer states such as Florida, California and Texas are the top three markets, but there are good sales in smaller states such as Arizona, too, says Giffin.