Ellumi Under Cabinet Light from Vital Vio
Fighting germs in the home with light
by Kristin Easterling
Tuesday, January 14, 2020 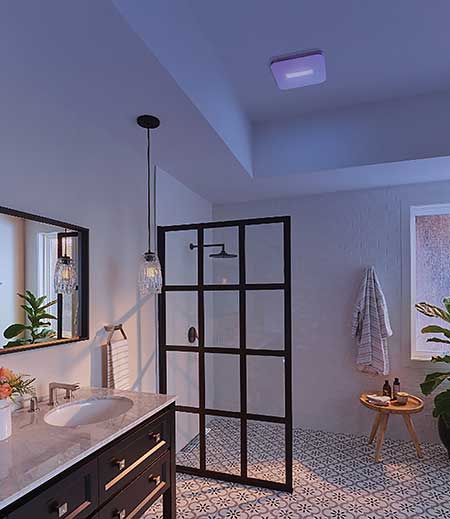 Supreme Court Justice Louis Brandeis famously said sunlight makes the best disinfectant. While he was talking about injustice, it has been proven that the infrared and ultraviolet (UV) light contained in sunlight provide antibacterial protection in health care and industrial settings—but usually don’t work in the home due to the danger those spectrums pose to human health.

The New York-based health technology company makes lighting for health care facilities that constantly cleans surfaces by killing pathogens and bacteria. The company began in 2013 after co-founder and CEO Colleen Costello’s grandmother contracted a staph infection in a health care facility and recently expanded into the homecare arena.

HOMECARE: Where did the idea for light-based antibacterial protection originate?

COSTELLO: After you wipe a surface down, there are 23 plus more hours in the day in which bacteria, mold and pathogens can grow. Light emitting diode (LED) technology is relatively new; in 2010 you couldn’t buy them in the hardware store, but now the lights are everywhere. LEDs let us pick a specific wavelength that targets organisms.

HOMECARE: How does the technology work? What sets it apart from UV disinfection techniques?

COSTELLO: We use violet light rather than UV. Germicidal UV-C is about 150 nanometers separate from violet. Violet light targets a molecule in the organism that gets excited, creates an overload of reactive oxygen species and explodes the cell—similar to the mechanism of bleach. UV light penetrates to the DNA, killing the organism. But UV also damages human DNA. If UV is used in an enclosed box or HVAC system, it’s fine. But violet works continuously because it doesn’t impact humans in the space.

HOMECARE: How do you keep the technology from interfering with daily schedules and sleep patterns?

COSTELLO: Circadian rhythm management is an important consideration for certain health populations. Often, it’s blue light that causes an impact, as it regulates melatonin production. With LEDs, you can modulate for the environment. There is no blue in our LEDs, so that eliminates that wavelength. The light also doesn’t have to be on while people are sleeping.

HOMECARE: How does Vital Vio integrate into the existing lighting of the home?

COSTELLO: We originally designed the technology for commercial sectors. Last year, we moved into residential environments. We asked ourselves, “How can we adapt?” People came to us asking for it. There were basic consumer concerns, from keeping surfaces clean, to reducing mold in the shower, to helping more at-risk people with asthma and those who are immunocompromised. The LEDs are in formats that can be used in the home. It’s really small, so it can be adapted to any shape or size. We recommend using it in high-risk areas—food prep, elder care, anywhere you don’t want contamination.

HOMECARE: How does this technology benefit seniors aging in place?

COSTELLO: With aging comes susceptibility to organisms. Living in a clean and healthy environment is essential. We wanted to provide a hands-off tool to create a healthier environment. We don’t want to add more labor-intensive products, so it’s a one-time installation.