The Power of One Therapist

This past July, as the tires of my power wheelchair rolled along the marble floors of the Senate and Congressional office buildings on Capitol Hill, the inspiration of it all was stronger than ever. After all, how does an infant born into a world of grim realities turn that start into a life of limitless possibilities by age 45? 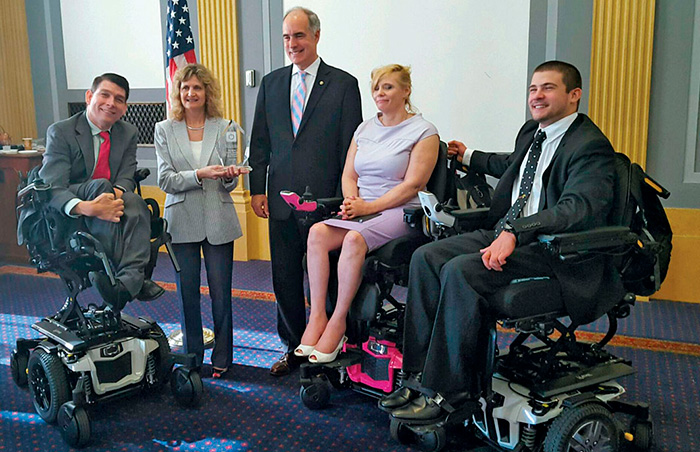 Smith, far left, on Capitol Hill to advocate on behalf of those who use complex rehab technology.

For me, the answer is that I was given two of the most remarkable tools to not just survive, but also to truly thrive. First, life gives all of us the ultimate gift in the form of resilience. And, second, 40 years ago, a lone therapist gave me the gift of complex rehab technology. When the two combined, it fueled a life where seeming barriers became boundless potential, where seeming obstacles became opportunities, where seeming grim prognoses became unlimited optimism. Those two gifts allowed me to achieve levels of success with disability that were flat-out deemed impossible. Indeed, as I rolled along the halls of Capitol Hill this summer, advocating for the preservation of complex rehab technology, I not only knew why I was there, but also what led me there beginning more than 45 years earlier.

March 2, 1971, was a bleak day. I know that is odd to say about one’s own birthday, but there is no other way to describe it. My grandfather was serving yet another stint in California’s San Quentin prison for armed robbery of pharmacies. My grandmother was a heroin addict and prostitute who would commit suicide in just a few years. At 7 o’clock that morning, as my mother prepared to give birth to me, my father was nowhere to be found, having been drinking at a bar all night.

Now, it’s a heart-wrenching reality that many children have been born into lives of such impoverishment and dysfunction. The only factor that made my circumstance different was that when I was born at 7:21 that morning, I wasn’t breathing. Was it due to an overdose of an epidural? Was it due to my mother drinking and smoking during her pregnancy? We will never know. However, what we do know is that the situation went from bad to worse. There was no infant respirator to revive me in the delivery room, and the only one in the hospital was broken. The only hope to get me breathing—and keep me breathing—was the doctor’s manual CPR.

Fortunately, there was a children’s hospital nearby, and as they rushed me there, they informed my mother that I wasn’t going to live. There is no way to diagnose a condition so quickly under such circumstances, but the doctors were sure I was brain dead, with only a few hours to live.

Hours, days, then weeks went by, and I simply kept breathing. I showed no cognitive or physical abilities—my tiny body racked by seizures—but my vitals were strikingly stable.

Despite my family’s profound dysfunction, my mother somehow found her maternal instincts and took me home, rather than institutionalize me as the doctors suggested. It was a remarkable gesture considering my parents struggled with addiction, and neither possessed an education past the 10th grade level. The downside was that my home life was grim and unstable, where my parents’ own issues most often took precedent over my care. In fact, I wasn’t a vegetable as labeled by doctors, but fully aware. And my earliest memories are of witnessing terrifying fights between my parents—with no mobility to escape. My youngest years were spent trapped in a body ultimately diagnosed with severe cerebral palsy and a family ravaged by dysfunction.

By the age of five, life was tough. My parents were chased around California by eviction notices, punctuated by a marriage that was on-and-off. Meanwhile, along with no ability to care for myself in any way, I had virtually no mobility. I was primarily carried and left wherever I was placed. The world seemed both an unfathomably large place and an inescapably small one all at once.

Amongst the harsh realities, though, a miraculous individual entered my life, literally picking me up from the rubber mats of a “special school,” as they were called before mainstream education existed. She was a lone physical therapist, who to this day I’m not sure knows how profound her actions were. 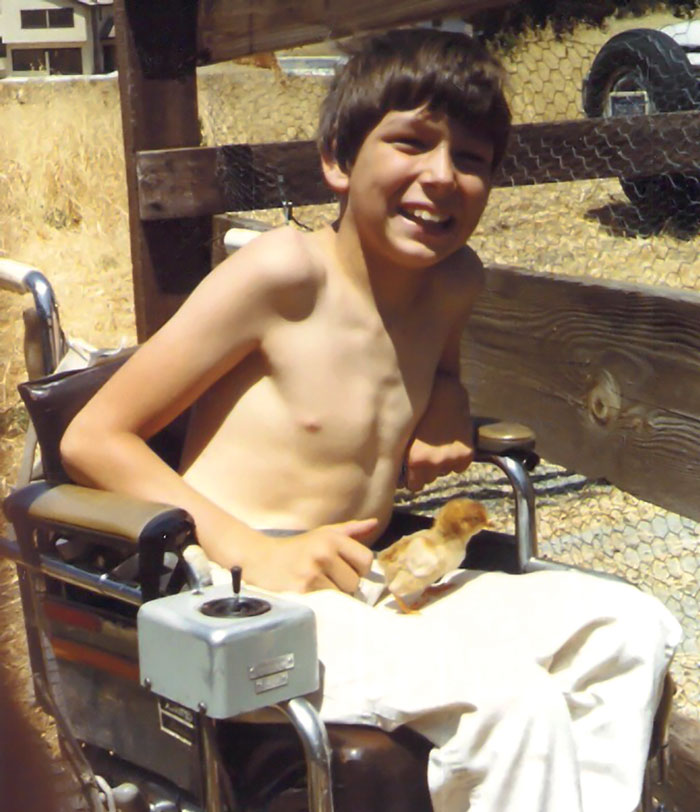 The author in an early-model power wheelchair that gave him the gift of mobility.

A wheelchair rep left a power wheelchair in her therapy room, and she thought of me, the 5-year-old with severe cerebral palsy who spent his days on rubber mats. It was the mid-1970s, and it was totally unheard of for a child my age to use a power wheelchair. In fact, they didn’t even make them in my size, and the one in her therapy room might as well have been the size of a school bus compared to my tiny, balled-up frame. I cannot fathom from where she drew her intuitive insight—based on my condition—but without hesitation, she sat me in that gigantic power wheelchair. As I struggled to keep my balance, she used everything from belts to tape to Velcro to secure me in the chair. As she explained how the power wheelchair worked, the machine was an absolute mystery to me. The concept that by pushing a joystick I could move anywhere I wanted was the most foreign idea I had ever heard. Was this possible? Could I somehow—magically—move on my own? If so, where could I go? What could I do? How would my life change?

Tensing every muscle in my body, I reluctantly reached for the joystick, a small metal post with a gray rubber tip. With the most courage I had ever mustered—after all, I had never known how to pursue true independence—I pushed the joystick. As if on a magic carpet, the power wheelchair took me across the room. I was so astonished by the miracle of it all, I don’t recall letting off the joystick for even a moment. Maybe I didn’t want that feeling to ever go away. In that instant, at the command of that joystick, I went from a world of confinement to a world of liberation. For the first time, I felt as though I was a person.

Within six months, thanks to that visionary therapist, I had a power wheelchair of my own. More importantly, I had a sense of identity that never existed before. Two years later, I was no longer confined to a rubber mat in a “special school,” but was beginning the third grade in a public school as one of the very first children with a severe disability to be “mainstreamed.”

The first day of school was one of the hardest of my life. No one knew how to react to me, and I struggled to fit in. I went home that day, rolling down the sidewalk in my power wheelchair, with tears streaming down my cheeks, knowing I had to go back the next day. Indeed, under the power of both my wheelchair and the human spirit, I vowed to do whatever it took to succeed. I was free, and I was never going back to a rubber mat.

Through junior high and high school, my power wheelchair ushered in a life that propelled me in directions unimaginable. As my home life completely disintegrated—alcoholism, divorce, neglect, poverty—every morning, no matter what transpired at home, my power wheelchair rolled me down many a sidewalk on a path that I knew would take me beyond disability and family dysfunction. Every morning, I knew my chair had the power to take me as far as my dreams, no matter how unrealistic they may have seemed to others from the moment of my birth. I knew that I had the power. I slowly learned that, although I didn’t deal the cards, I could play them.

For many years, I didn’t know why that physical therapist picked me up from that rubber mat and placed me in that power wheelchair. Was she curious to see how a child with such a severe disability as mine would do in a power wheelchair? Was it fate? Was it divine intervention? After all, how does one explain such a life-changing occurrence, especially given the era? What I now know is that while all of those certainly could be the case, there is one absolute: that one therapist understood not just the value of complex rehab technology, but also the value in each individual’s life.

HME Products
Managing Medications at a Distance
A survey of tech options to help seniors stay on top of their meds post-pandemic
HME Products
Survey: HomeCare Readers Report on PERS Sales & Referrals
Understanding trends in the market
HME Products
Help at the Push of a Button
How mPERS can help support both your business & your patients
HME Products
Put the Squeeze on Leg Pain With Compression
How to help customers find the right product
HME Products
Why Proper CPAP Use Matters During Flu Season
4 steps to increasing compliance & keeping users healthy

Home Health
Is Your Mileage Tracking Software Disclosing Too Much?
Understanding the HIPAA implications of electronic visit verification
Legislation & Regulation
Understanding the HCPCS Code Application Process
How PDAC handles new codes
HME Products
Managing Medications at a Distance
A survey of tech options to help seniors stay on top of their meds post-pandemic
Home Health
4 Key Factors in Creating an Onboarding Process
Help your employees start on the right foot
Home Health
A New Role for Personal Care
How companies’ response to the COVID-19 pandemic can shape their futures