Pennsylvania provider ArmsCare chooses customer service over Medicare
by Susanne Hopkins
Thursday, May 10th, 2012
Sometimes, it’s best just to say no—even when it comes to Medicare reimbursement.
More than a year after the Centers for Medicare and Medicaid Services implemented its competitive bidding project in nine areas throughout the country, Jesse Riggleman, director of Kittanning, Pennsylvania-based ArmsCare, has no regrets about turning down Medicare contracts in the Round 1 Rebid.
It wasn’t an easy decision for Riggleman and his staff to make, but it was a clear one, he says. “When the prices came out we discussed it and said no way, in any of the categories,” says Riggleman, whose full-service home medical equipment company won a CPAP contract, among others. “It wasn’t just the cost issue compared to the reimbursement issue, it was the whole matter of taking care of the patient at all. I hope that when the Round 2 bidders came up with their bids they considered that. The patient being taken care of should be their primary goal.”
The Medicare competitive bidding rates in the Round 1 Rebid were nowhere near enough to pay for the care attached to providing the various products, Riggleman explains. “We couldn’t make any money at the prices they offered. It’s not that we don’t want to do it; we would love to. But what cuts would I have to make in order to do so?”
Inevitably, Riggleman says, ArmsCare’s customer service would have taken a hit. “Who loses out in the end? It’s the Medicare recipient. They aren’t getting the service they are used to.”
So Riggleman rejected the contracts and, frankly, ArmsCare has lived happily ever after. In fact, he says the company is so busy his staff “cannot keep up with it.”
That wouldn’t have been the story 10 or even five years ago. Then, it would have been a grim ending for the hospital-affiliated HME provider. But companies can change, and ArmsCare has changed dramatically, indeed. 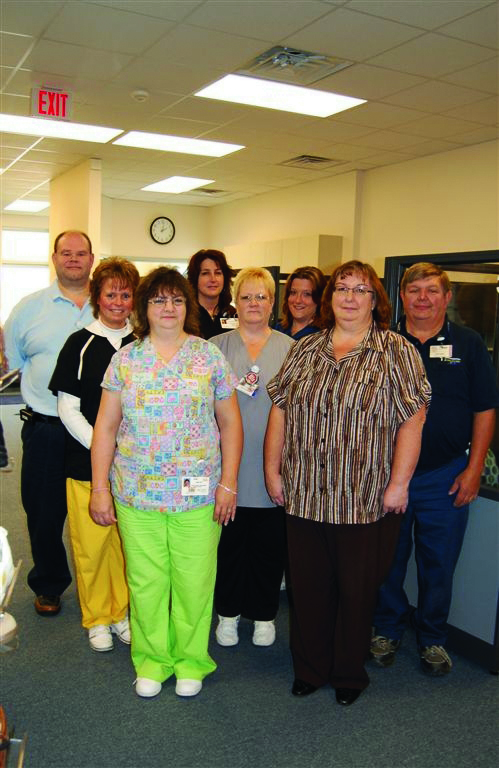 ArmsCare opened in 1985 with three employees. While the company has grown over the years, customer service remains a primary goal.

Riggleman became involved with ArmsCare in 2004 as a health care consultant the company brought in to help determine its direction. Affiliated with Armstrong County Memorial Hospital, ArmsCare was launched in 1985 to allow the hospital to better serve the community and its growing need for HME. The three initial employees ran the business out of a supply closet in the garage of a maintenance building behind the hospital. By the time Riggleman came on the scene, ArmsCare had seven employees and was housed in a suite at the rear of the hospital.
The company’s business was almost 90 percent insurance. Retail was definitely not a key component. “ArmsCare had a small, 5- by 8-foot display area at the time,” Riggleman recalls. “One wall of soft goods, one of diabetic supplies, and one of odds and ends, but it had a 4,500 square-foot warehouse below.” 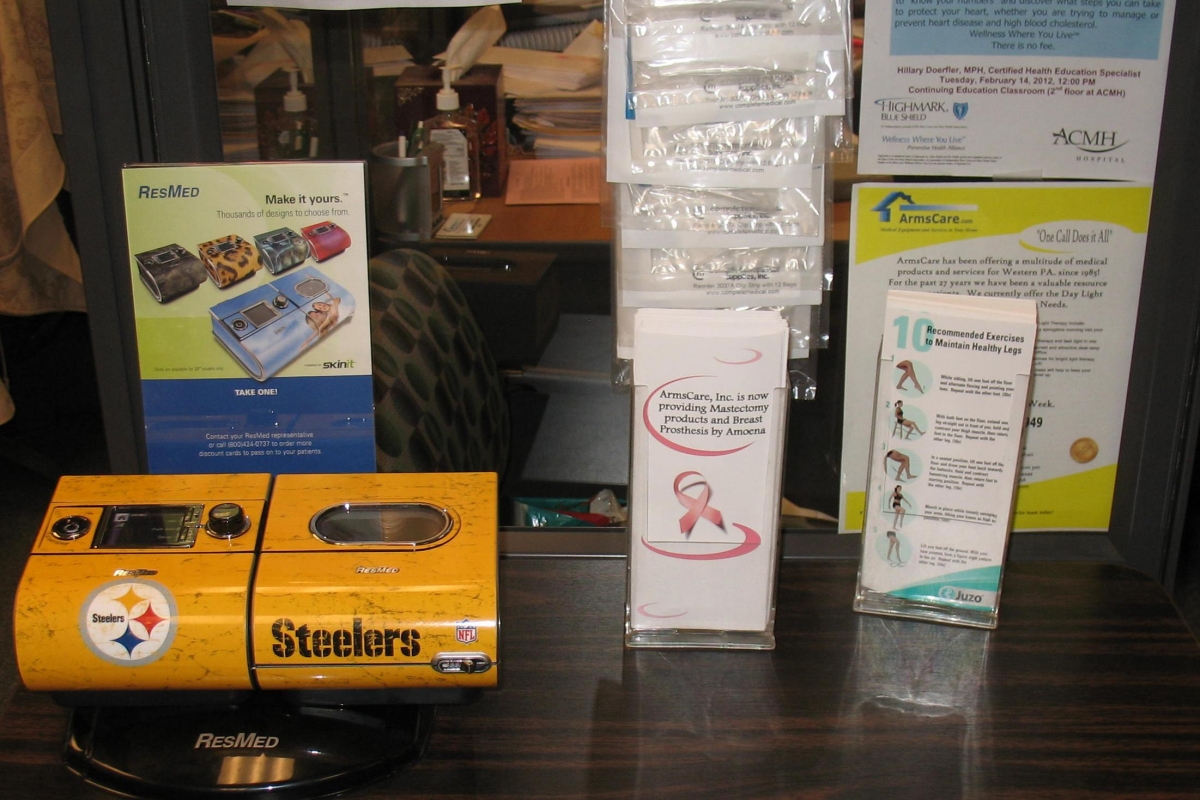 One popular retail item at ArmsCare is the Skinit, a sleeve for ResMed CPAP products. The line is available emblazoned with a variety of sports and college/university logos.

That warehouse space allowed ArmsCare to carry a large inventory. The only problem was that customers had to walk down a flight of stairs, and they also had to navigate a 30- to 40-foot ramp to the front door; a bit dicey with snow and ice in winter.

“That wasn’t the most prudent thing for people who often had mobility issues,” Riggleman says. The company also had an identity crisis. It did not do any marketing or have a sales rep. That was a problem, and not only in the community.

“ArmsCare was the best-kept secret in the hospital,” he says. When he talked to hospital staff about ArmsCare, their response was often: “What’s ArmsCare?”

Still, the company—which boasted a strong business in respiratory services and oxygen—had tremendous potential. Riggleman could see it, and when he was asked to stay on and run the business, he agreed. One of his first actions was to work with the company leadership to determine where ArmsCare wanted to go and to devise a business plan.

The team took a look at demographics. The Baby Boomers were about to hit and Kittanning, which is 44 miles northeast of Pittsburgh, had only one other local HME provider. Baby Boomers pay cash.

“We needed a retail location because the insurance side was going downward,” Riggleman says. “The margins we once had in the HME industry no longer existed. And in some cases, you were lucky to make a profit at all.”

Riggleman says the main question was, “How do you make adjustments so they balance out and still serve the customer?” The key for ArmsCare appeared to be a new location that would allow the company to grow its retail sector. There was not enough space in the hospital itself, and they didn’t want to move two or three miles away. An opportunity arose in 2010 when a business closed along the road leading to the hospital. ArmsCare snapped up the building. “We kept the warehouse,” he says, “but we put the retail location in front of the hospital.”

ArmsCare’s retail location, which formally opened Nov. 8, comprises 900 square feet in a 2,500 square-foot space that also houses offices. “Our grand opening was phenomenal. We had a two-week dry run just to test the computers, the traffic flow and the products. On opening day we had over 500 people show up. From morning until we closed, it was nonstop.”

The hospital cafeteria catered the event, and had to restock the food three times. This despite the fact that the weather wasn’t particularly good that day.

“It was one of the best days I’ve ever had, talking to all the people who dropped by and discussing the products we carry.”

People were amazed at ArmsCare’s stock—even though it had always carried a wide range of products. 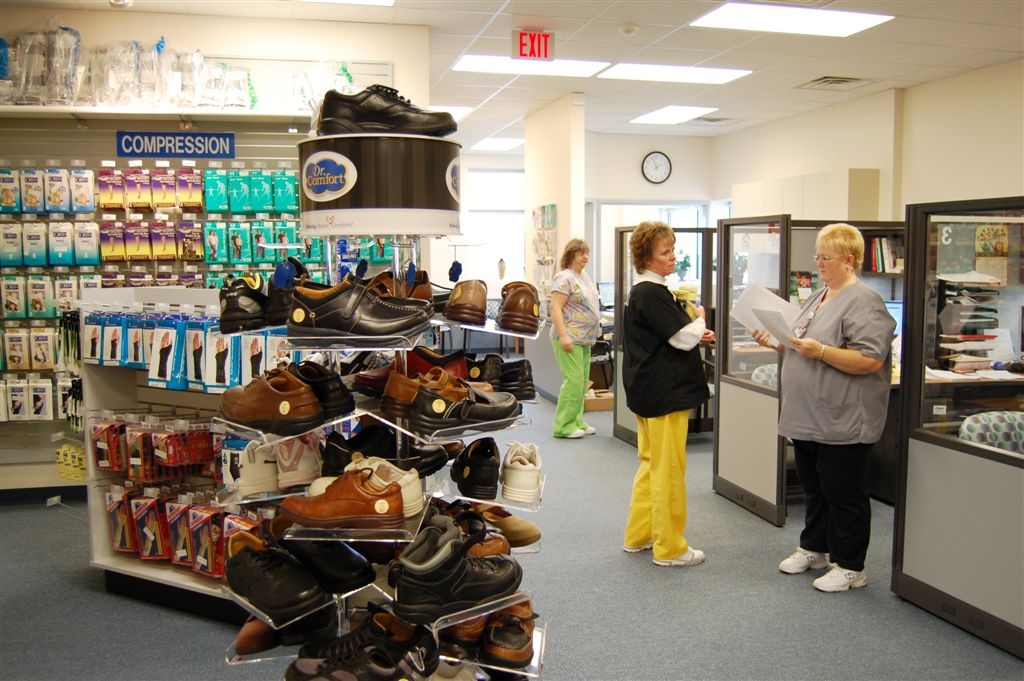 “It’s been a challenge to get everybody to understand what we carry,” Riggleman says. “Nobody knew about the extent of our inventory. Ninety percent of the products we had were down in the basement before, just sitting there. Now people are able to see it, touch it and feel it.”

The new location has had a tremendous impact on ArmsCare’s business. “Now the turnover in products is just phenomenal. In fact, it seems as if we are always reordering!” 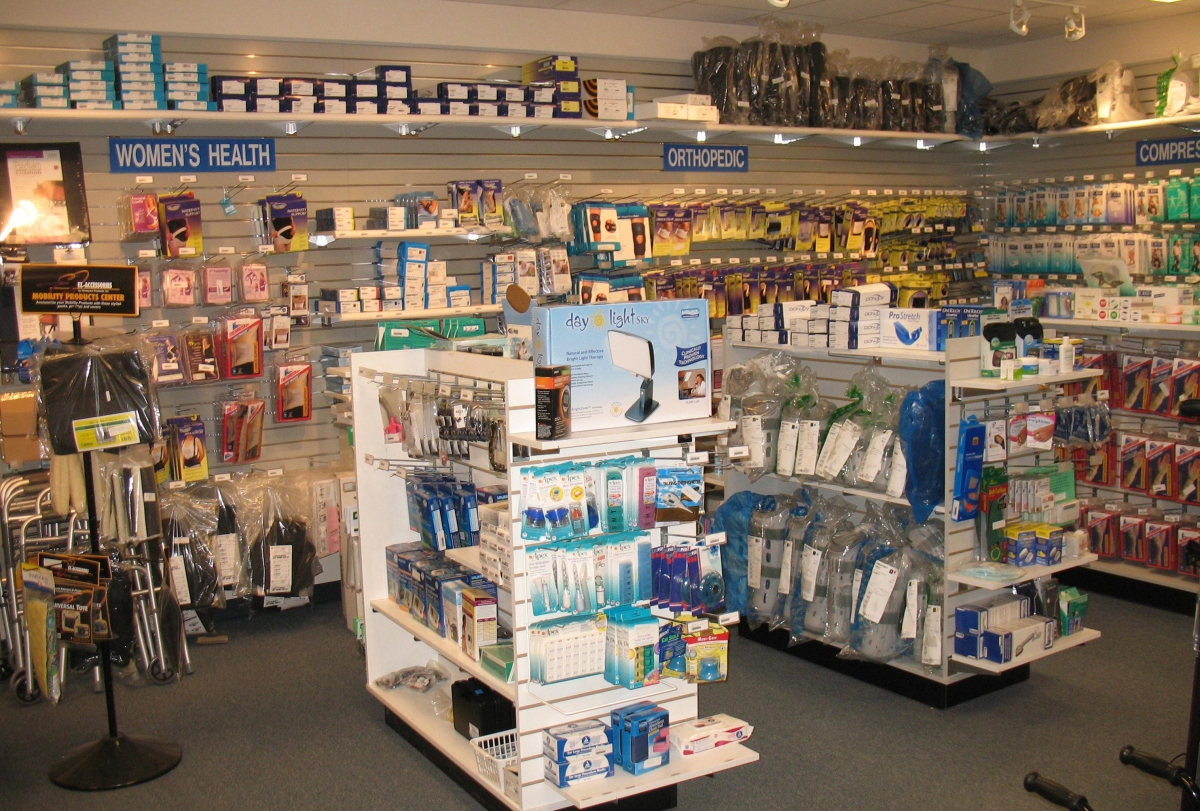 Riggleman says the biggest problem he has now is keeping up with the growth that the retail sector has generated. Running a retail business, he has found, is not the same as running a company that caters to insurance payors. For example, he’s making adjustments to his staff so that some employees are dedicated to the retail arm of the business while others handle only insurance. Even with growing pains, however, he knows he’s on the right path. He predicts there is going to be less insurance coverage and less reimbursement in the HME industry’s future. 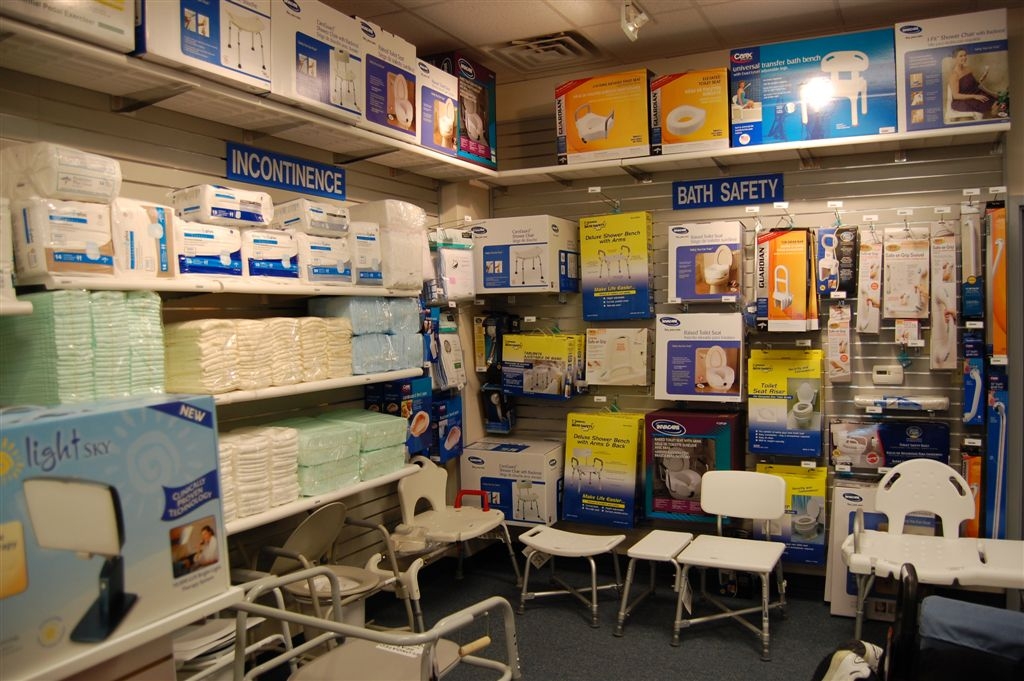 ArmsCare does will with traditional HME like incontinence and bath safety products.

“It will be 60 to 80 percent cash,” he says. “Every year the insurance companies come out and no longer cover this or that, and the burden is pushed more onto the patient. We’ve seen this coming down, and that’s why we started preparing—and are still preparing. We are not where we want to be.”

Still, the result so far is gratifying, and the company has a much stronger bottom line. ArmsCare has whittled its dependence on insurance down to about 50 percent, and only about 8 percent is traditional Medicare. “Anytime you’ve got cash compared with waiting for your money, it’s a good thing.”

Part of ArmsCare’s uptick in business can be attributed to marketing, which is now an integral part of the company’s core philosophy. While ArmsCare advertises in all media except television—too expensive and problematic, Riggleman says—as a way of keeping its name in front of the public, the company has not been able to accurately track any medium’s effectiveness, whether newspapers, radio or flyers. However, its sales reps are getting good results. 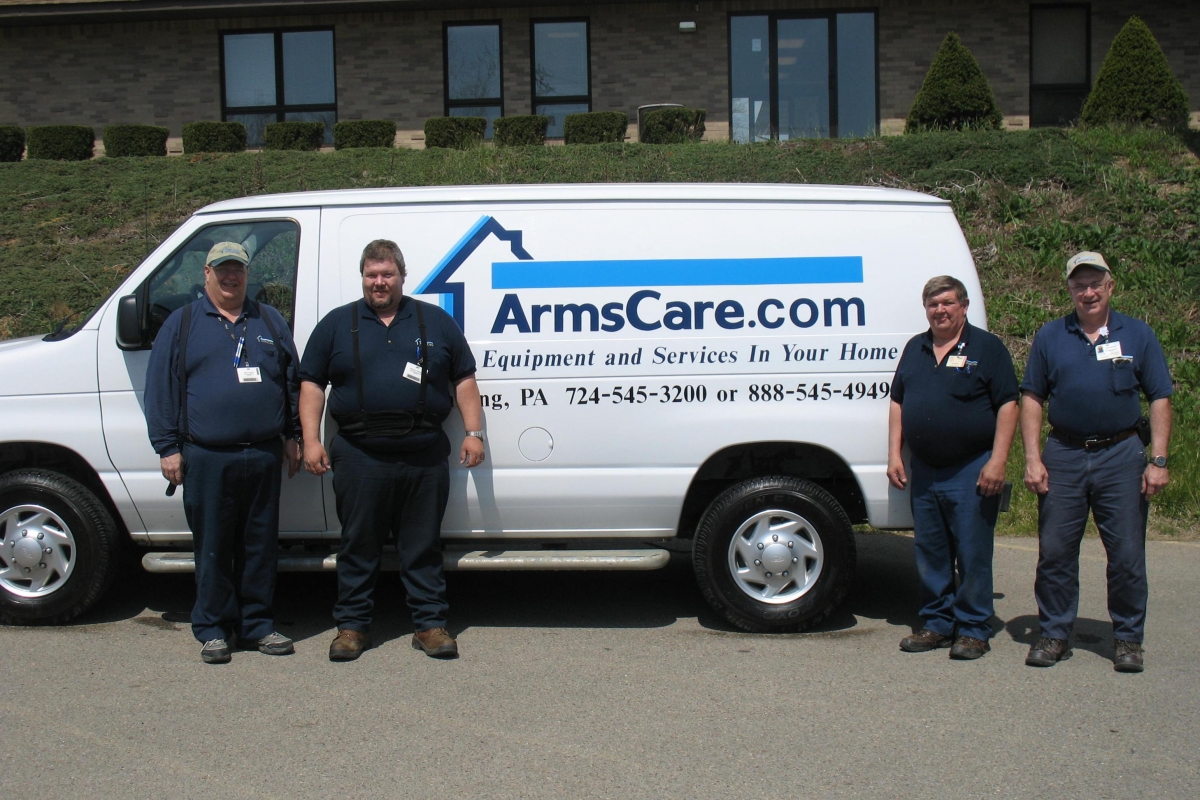 ArmsCare refused to compromise its customer service levels to accept a Medicare contract.

“Our marketing sales reps are going out to physician offices and nursing homes and educating those sources about the products we carry. We believe that most of our business is coming from word of mouth from the physicians,” Riggleman says, noting that ArmsCare business falls when a sales rep isn’t on the scene, and it rises when one is out there actively selling. That education piece is crucial, and not only for physicians and other referral sources. “About eight years ago we talked about where the industry was going and insurance plans,” he says. “But what we talked about aside from that was education.” 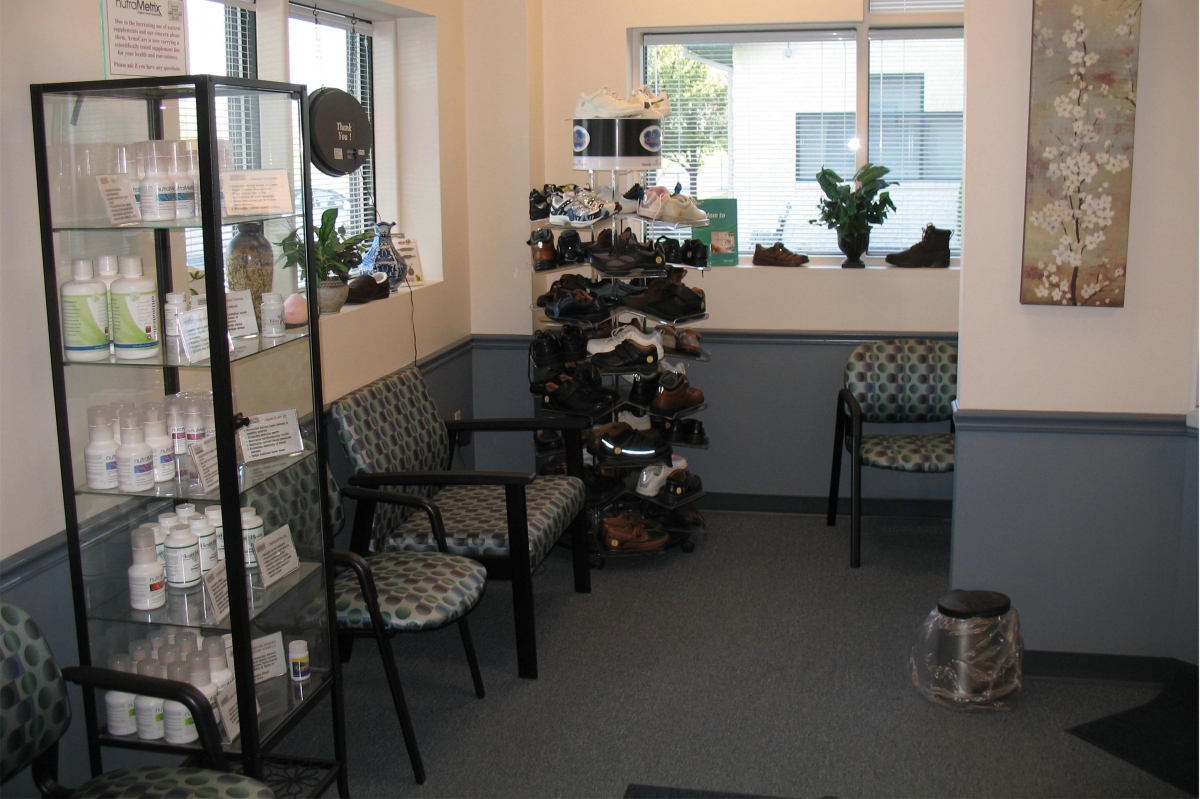 Riggleman envisioned an actual classroom for patients where they could learn about their CPAPs, diabetic supplies and other products. With so many customers comparing products online in an effort to save money, hands-on education was something ArmsCare could offer that an online vendor could not. Educational opportunities are available for COPD patients and diabetics once a month. Of course, that means his staff has to be educated, too.

“People are asking questions now, they are able to find out information online, they are more in tune. We have to stay a couple of steps ahead of them and be prepared to answer their questions and take care of their needs,” Riggleman says.
He’s also educating the hospital staff about ArmsCare and its services. So far, only 1 percent of his business comes from the hospital, so there is great potential there. “We will be here to help the hospital in whatever way we can, to help patients get the equipment they need so they can go home.”

Like the educational component, ArmsCare’s business processes are always evolving as the staff continues to ask the question: How do we best take care of that patient? “Every individual’s needs are different,” Riggleman says. “We have to be careful on how we do business. We have to make sure we take care of that patient, make sure they have the equipment and the products they need, and we need to do a better job than anyone else in our area.”

Turning down the Medicare competitive bidding Round 1 Rebid contract was the right thing to do, especially when viewed through the prism of patient care, Riggleman says. “We chose not to do business with Medicare and the way it is run. We could not accept these prices and still in good conscience continue to do good service. We have not cut down our service. If a patient runs out of liquid oxygen, our guys come out in the middle of the night. I cannot tell a patient no. I made a commitment so it’s up to me to take care of that patient, whatever their needs are.”

No matter what changes occur at ArmsCare the level of patient care will never be at risk, according to Riggleman. “We try to make sure that we give the best care to our patients. That’s one area we will never cut back.”

Even if it means saying no to Medicare.