Tips for increasing your practice's reimbursements as the exchanges roll out
by Steve Selbst
Tuesday, February 23rd, 2016

In October 2013 the national health insurance exchanges were launched. There has been quite a bit of press since about the pros and cons of the new exchanges, and the overall effectiveness and affordability of the Affordable Care Act insurance mandates.

First, it is important to have a basic understanding of the structure of the health exchanges. That is, what is consistent across all exchanges (federally run and state run) and what is unique and, therefore, inconsistent. At the time of this writing, 16 states had implemented state-run exchanges. The remaining 35 exchanges (including Washington D.C.) are either run by the federal government or in a partnership with the federal government. (See map below.) 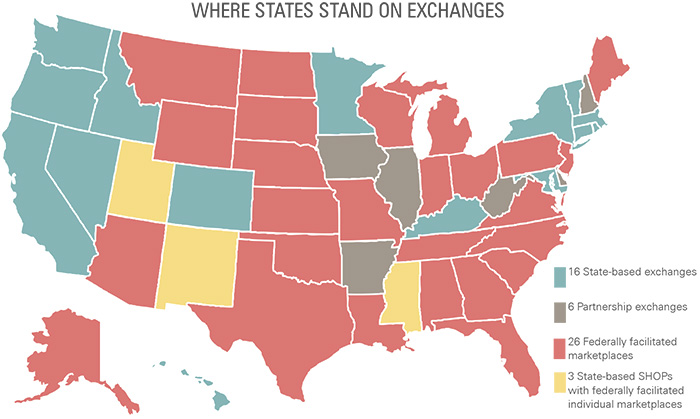 Regardless of who runs the exchanges, there are some clear consistencies. The following are key operational elements that have downstream effects on the delivery and reimbursement for care, and are key to understanding the exchange plans from a provider perspective.

However, there are many inconsistencies at this time. They include:

As of this writing, many of the enrollment difficulties at the federal website have been resolved. However, it is estimated that 5 million (or more) people purportedly had their current insurance policies terminated effective January 1, 2014. This issue could affect physician reimbursement outcomes as those individuals look for new plans on the exchanges, possibly at lower reimbursement rates, in some cases, than standard PPO Plans. The current trend in health care exchange enrollment indicates that the vast majority of individuals currently enrolled in state exchange plans qualify for expanded Medicaid coverage, and are accessing policies with reimbursement rates equal or close to state Medicaid rates. This could potentially have a significant downside impact on a practice's revenue and margins. There is a range of questions about the exchanges as it relates to physician reimbursements. Below is a pragmatic view of each.

How do I know if I have an option to contract with a payer's exchange product, and how do I validate participation?

The answer varies from payer to payer and from state to state. First, whether you participate in a state run exchange or a federally run state exchange, you can visit healthcare.gov and find out what plans are available. Follow the questions about family coverage to get the options available. See chart on left, opposite page, for a partial result of navigating healthcare.gov for North Dakota. You will get the results for all payers and plans, and the estimated premium payments based on the query. 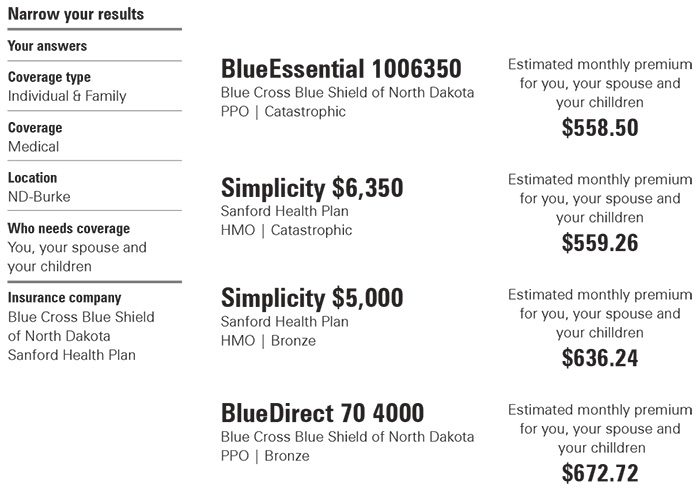 Once you have identified the plans, go to the website of the payer to determine whether your practice is a participating provider in the plan. In the example above, you would go to the Blue Cross Blue Shield of North Dakota's website, and search for your practice by name.

If your practice is in a payer's network, the next question is, "What will my reimbursement be for this exchange product?" The reimbursement for exchange products is often the same as your contracted fee schedule for the plan product in which the patient is enrolled. The difference is exchange products have patient co-payments that vary based on the beneficiary's selected exchange product. For example, a patient with an exchange Catastrophic plan may have a co-payment of greater than 40 percent, while a patient with a Platinum plan in the same exchange product may only have a 10 percent co-payment. Your office staff will need to have the business processes and systems in place to track the variance of co-payments based upon the patients' selected plans. Because the exchange plan co-payments, deductibles and co-insurance requirements will vary based on the exchange plan type, it is imperative that the office team put the appropriate systems in place to ensure that payer contracted payments and patient payments are accurately collected.

Because payers who participate in exchange plans need broad physician networks in support of the plans, if you are a specialist, you may be able to use an agreement to participate in an existing or new exchange plan product as leverage in a contract negotiation or re-negotiation of an existing payer agreement. Generally you have the option to opt in or out of a state exchange plan. For example, a large payer in Arizona automatically pays contracted practices the same contracted rates as its standard PPO plans. However, it is still incumbent upon practices who are auto-enrolled in the exchange plans at the usual PPO rates verify benefits and collect co-payments, deductibles and co-insurance payments according to the terms of the state-based plan, because these payments vary for all plans from catastrophic to platinum.

Some states have new payer products being put in place with new and, in some cases, lower fee for service reimbursements from the usual commercial products offered in the individual or small business markets both in and outside of the exchanges. We have seen one such scenario in the state of Texas. In this case, in order to complete a renegotiation of an existing agreement, a payer required that a practice participate in a new exchange plan—which paid significantly less than the PPO plan being negotiated and was to be offered both inside and outside the exchange in the coming year—in exchange for an increase on an existing PPO fee schedule.

In this case, it is imperative that you determine the financial effect of choosing to participate in the new product by understanding the estimated population of people who may choose this new plan both on and off of the exchange. It is important to ask, "How and to whom is this new plan going to be marketed?" "Will this new plan be incentivized at brokerage firms?"

Once properly armed with information, you may have an opportunity to leverage your agreement to participate in the new product to help achieve increases in your exiting agreement.

To protect against unexpected and undesirable outcomes, such as discovering that you are unknowingly participating in an exchange plan at low reimbursement rates, it is best to take a methodical approach to determine your status as it relates to each of your payer contracts and the plans covered by each contract. The best practice would be to first catalog all of your key commercial payer contracts. Create a list of the payers and the plans/products in which you are contracted. Then visit the website in your state to determine the payers who are offering plans on your state exchange by payer and then by product. Next, determine if you are already listed as a participant in those plans by reviewing your contract documents or researching on each payer's website which plans are shown as being accepted by your practice. Last, validate the fee schedule that is in place when you service exchange-based patients. Also, be aware that many payers have sent or will be sending written correspondence to communicate their procedures for your exchange participation. Read all payer correspondence carefully and respond appropriately. In some cases, a non-response could mean that you or your practice is automatically enrolled in a plan or automatically opted out. In other cases, you have to respond before the noted deadline in order to opt in or out.

With enrollment problems, why would we assume that there are accurate systems and business processes in place to track premium payments for exchange-based policies/plans, benefit eligibility and deductible amounts paid to date?

It is critical that your billing and practice management systems be plumbed to handle the business rules related to exchange patients such as the 90-day grace period and to ensure that each individual claim is tracked and paid per your contracted rate. While the payers and the exchanges have their systems, it is best that you rely on your own systems to ensure timely payments and accuracy of payments.

Can I collect from the insurance company if a patient in an exchange plan misses premium payment(s) or has terminated or changed their plan choice in the exchange?

One of the potential "gotchas" of administering patients who are in exchange plans is the 90-day grace period rule. That is, patients who are in exchange plans and receiving subsidies are given 90 days to catch up on their premiums once they miss a payment. The grace period is triggered once a patient with subsidized exchange plan coverage misses a premium payment. Instead of immediately terminating the patient's policy, health plans must give the patient 90 days to catch up.

Federal rules allow health plans to pay, hold, deny or later recoup payment of claims for services incurred in the second or third month of that window if patients are delinquent on their premium payments. However, insurers must pay physicians for services provided to a patient in the first 30 days of the grace period, and insurers still must comply with state law requiring prompt payment of claims submitted at any point during the grace period. For patients who are not subsidized, the termination policy, including grace periods and payer/provider responsibilities, reverts to the laws and regulations in the state in which the patient purchased their exchange-based plan. The issue, therefore, is a practice management matter. That is, it will be incumbent on practices to verify, prior to delivering services (each time) that patients with exchange-based plans are current on their premium payments, and not in a grace period due to non-payment. Additionally, it would be prudent to verify that previous claims have been paid in a timely manner. If not, there is the potential of having to collect the full amount of reimbursement (both payer and patient responsibility portions) directly from the patient, increasing the risk of larger amounts of outstanding accounts receivable and lost revenue due to inability to collect after services are rendered

In summary, there are many considerations for a practice when looking at participation in a new or existing product offered by a payer on the health insurance exchange. There are key business and systems processes that need to be in place to detect the current status of participation and to determine the reimbursement rates of an exchange-based plan. It is important that you have a clear plan in place now to navigate the exchanges. In addition to the advice in this article, it is imperative, too, that you consult your legal counsel about the legal ramifications for provider participation and business practices relating to health exchanges.

CMS/Medicare
Implementing Electronic Visit Verification for State Medicaid Programs
Benefiting fraud reduction & agency operations
Aging in Place
How Does a Pandemic Change Everything?
The future of homecare
CMS/Medicare
Expect Audits After the Emergency Ends
7 areas of concern related to COVID-19
CMS/Medicare
When an Emergency Becomes Everyday Reality
Formalize processes to make a plan for the “new normal”
CMS/Medicare
Checking in on Round 2021
Ready or not, here it comes