The Convergence of Change in Post-Acute Care

In this article, Alvarez & Marsal (A&M) provides a brief synopsis of the external factors that will fundamentally alter the post-acute sector. These include a rapidly aging population; health system and hospital consolidation, the evolution of Medicare payment reform; a preference by many state Medicaid agencies for homecare based services; The Impact Act of 2014; and the advent of “Big Data.” The magnitude, rate and timing of change will vary by state, and more specifically, metropolitan statistical area based on the local supply and demand for services, as well as competitive intensity.

Historically, post-acute care stakeholders have benefitted from a facility-centric reimbursement system. That will change, as United States Department of Health & Human Services (HHS) Secretary Sylvia Burwell has stated her objective to have alternative payment models account for 50 percent of payments by 2018, and to have quality and value metrics linked to 90 percent of all Medicare fee-for-service payments by the same year. 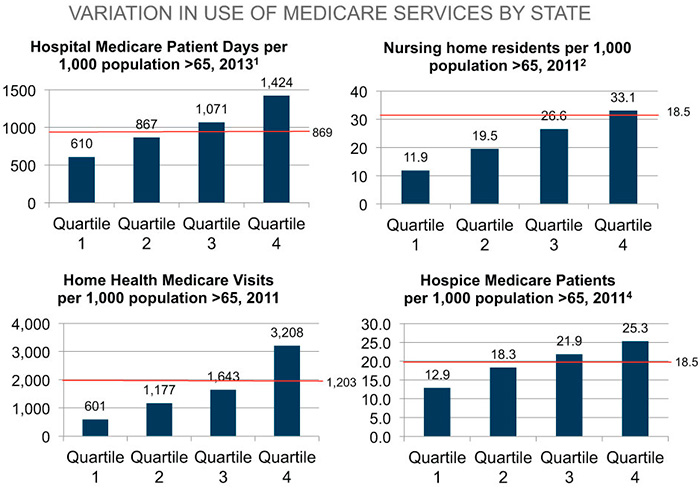 Medicare spending is forecast to increase from $647.3 billion in 2015 to $1,282.4 billion, reflecting a compound annual growth rate of 7.1 percent. Medicare spending per beneficiary increases from $7,859 to $12,805, +63 percent between the ages of 65 to 74 and 75 to 84, consistent with the impact of an increase in the number and severity of comorbid chronic conditions and the high cost of end-of-life care. Opportunities exist to reduce the number of ambulatory care sensitive hospitalizations in patients with chronic conditions and increase the utilization of palliative care in the management of end stage chronic conditions and the frail elderly. The incremental rise in (primarily Medicaid) spending for the over 85 population can be largely attributed to cognitive decline, with Alzheimer’s disease and other forms of dementia.

Hospital consolidation has further increased the concentration of potential post-acute care referrals. Since 2007, there have been 569 announced deals involving 1,144 hospitals. According to the American Hospital Association, there are 4,974 hospitals in the U.S., implying that 23 percent of the total were involved in a transaction during the past few years. The primary driver for acquisition, ostensibly, has been scale and its related operating efficiencies. We believe market share, rather than scale, has been the primary near-term driver for acquisition, leading to less competition in select markets and an improved negotiating position relative to commercial payers.

The Centers for Medicaid & Medicare Services (CMS) has taken the lead for payment reform. Initial efforts focused on process and satisfaction metrics have shifted to outcomes and efficiency. They have also extended from the hospital to the 30-day post-discharge period and more recently, to 90 days and beyond. Penalties (and gain sharing opportunities) have increased from 1 to 3 percent over several years, to potentially 5 to 8 percent in the Home Health Value-based Purchasing pilot, effective in 2018.

The Comprehensive Care Joint Replacement (CJR) initiative, effective April 2016 for Medicare FFS beneficiaries in 67 metropolitan statistical areas (MSAs), includes all costs related to Medicare Part A (facility) and Part B (physician services, outpatient services, lab, ER visits, specialty drugs, DME, etc.) during a 90-day episode (bundle) starting from date of admission through surgery, hospitalization and recovery, including post-acute care. Hospitals will be accountable (at-risk) for the cost and quality of care, with potential collaborators required to engage with the hospital in its care redesign strategies.

Rising penetration of Medicare Advantage (MA) and its impact on admission criteria, length of stay and payment rate is also affecting post-acute care providers. MA penetration is 31 percent, with five states having over 40 percent penetration.

Many states, under the Medicaid 1915c Home and Community-based Services (HCBS) waiver, have been diverting or transitioning aging patients from institutional settings to their home and community. Standard services include case management (i.e. supports and service coordination), homemaker, home health aide, personal care, adult day health services, habilitation (both day and residential), and respite care. The Program of All-inclusive Care for the Elderly, known as PACE is a Medicare and Medicaid program that is focused on patients “needing a nursing home-level of care and able to live in the community (with assistance).”

Congressional approval of H.R. 4994, the IMPACT Act, mandates the development and implementation of a standardized post-acute care (PAC) assessment tool, and requires the Medicare Payment Advisory Commission (MedPAC) to evaluate and recommend a technical prototype for a post-acute care prospective payment system, inclusive of payment rates based on the characteristics of individuals rather than setting.

The HITECH Act allocated $19.2 billion to increase the use of electronic medical records (EMRs) by hospitals and physicians. Stages of “meaningful use” incentive payments were created to focus efforts on enhanced data capture and sharing, clinical processes, decision support and outcomes. Despite rising hospital, outpatient and ambulatory practice EMR adoption, interoperability across vendors and settings remains limited. Post-acute care providers, not included in the legislation for EMR financial incentives, remain behind in the effort to promote health information exchange.

The advent of cloud-based technology platforms able to extract information from disparate EMRs, combined with the increased availability of CMS claims data poses a challenge to those post-acute care providers unable to afford the data infrastructure needed to facilitate improvements in care efficiency and effectiveness, especially with regards to readmissions.

All Health Care Is Local

The application of high-level market assumptions, based on the described external factors, also needs to consider the particulars of a local market. Each market has its own distinct demographics, balance between the supply and demand of health care services, provider market share, competitive intensity, efficiency and effectiveness of care delivery, and degree of innovation.

In July 2013, The Institute of Medicine (IOM) published a seminal report entitled “Variation in Healthcare Spending: Target Decision Making, Not Geography,” and found that higher spending in Medicare primarily comes from the “variation in utilization of post-acute care services [73 percent] and, to a lesser extent, by variation in the utilization of acute care services.” The report was generated following more than 20 years of evidence generated by the Dartmouth Atlas of Healthcare, highlighting significant variation in Medicare FFS spending (by state, metropolitan statistical area, hospital referral region, hospital and type of service) without an apparent relationship to clinical outcomes.

Post-acute care stakeholders have benefitted from a facility-centric reimbursement system. The advent of capitated and episode-of-care payments (as per CJR), combined with the availability of “Big Data” will facilitate the creation of a patient-centric care delivery system focused on “the right treatment at the right time for the right patient in the right place.” Winners and losers will emerge.

CMS/Medicare
Reflecting On 2020 With HME Leaders
How state leaders navigated stormy seas of advocacy in a COVID-19 world
CMS/Medicare
Can You Sell Portable Oxygen Concentrator Accessories for Cash?
Dive into the Medicare policy
CMS/Medicare
Implementing Electronic Visit Verification for State Medicaid Programs
Benefiting fraud reduction & agency operations
Aging in Place
How Does a Pandemic Change Everything?
The future of homecare
CMS/Medicare
Expect Audits After the Emergency Ends
7 areas of concern related to COVID-19