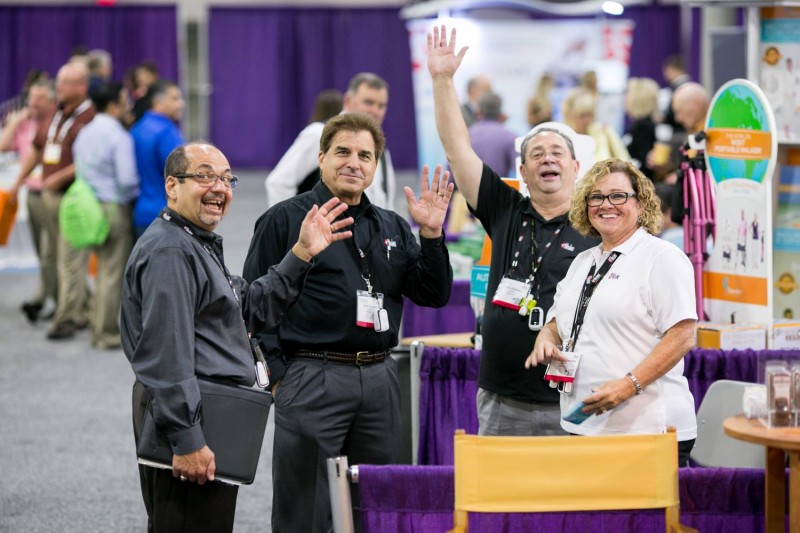 Masimo is all smiles at Medtrade 2017. Photo courtesy of Medtrade.

Barely unpacked from the National Association for Home Care and Hospice’s annual conference in California, the HomeCare team headed to Medtrade 2017 in Atlanta. We met with a good ole Southern cold front rainstorm driving in and were welcomed by the warmth that our industry is known for.

Picking out a "best of" Medtrade would be hard because there were so many good features. We saw pretty awesome products, with flurries of activity (at several different speeds) around mobility … products o’plenty for helping people live well as they age in place, with or without chronic conditions ... companies we’ve known for a while, such as Pride, CAIRE and Philips, sharing their innovative product designs; companies new to us, such as Owlet and Stabilized Steps; and more.

Mike Sperduti choreographed quite a sales show we heard (Did anyone review “Death and Life of an HME Salesman?”), as did VGM at the World of Coke (If you tried Beverly let me know your thoughts).

Still carrying the torch in Washington, the American Association for Homecare brought its A-Team. The hard work of the go-getters and brains leading this national organization is getting noticed, and they report some gains from the powers that be.

Whether or not reimbursement rates from Medicare will be restored to the January 2016 50/50 blended rate, only time will tell, AAHomecare says, but hopes are high that retroactive reimbursements from January 2017 will happen now, or ASAP, to help maintain the access to care that so many people need, while providing some relief to weary providers in communities across the United States. Then as 2019 is contemplated, CMS will rewrite the rules more favorably and factor in the associated costs of service that were left out of the current rate equation.

Smiles were noted among the providers who either have started or have shifted to a retail concept. Those I talked to reported growth and positive results.

One DME/HME provider, who opened her store in May 2015, sans oxygen service, reported customer enthusiasm for compression products, orthopedic products and pediatrics. Her company launched with a pediatric to geriatric strategy; she said she has had no regrets. She also located her business near health centers and stresses the core value of customer service and one-on-one interactions.

Those providers who maintain reliance on the traditional elements of the payer equation said they focus on working smart. However, with so many providers shuttering, we keep hearing people’s home medical equipment options are dwindling as lots of owners are looking to sell.

If you attended Medtrade or otherwise have thoughts on the industry that you would be willing to share with HomeCare, let’s chat—ecarey@cahabamedia.com.